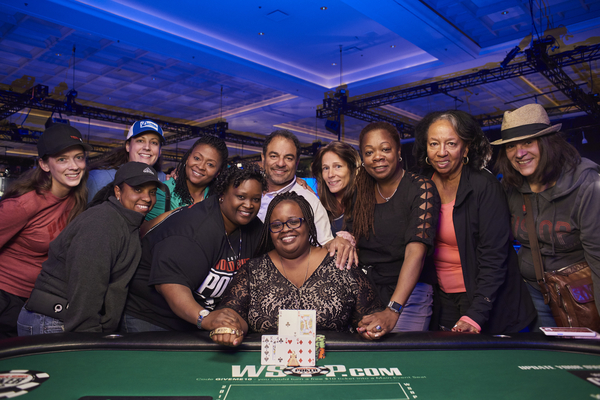 Kennedy, who knows the game from the other side of the felt as a poker dealer, earned her first gold bracelet and first cash at the World Series of Poker. She defeated Amanda Baker heads-up for the title. The ladies event drew 819 players this year. None of them were able to outlast a WSOP first-timer, not even the great Vanessa Selbst, who finished 23rd for $4,160 on Saturday.

Wendy Freedman, a Las Vegas local, had the chip lead when the final table began. But her luck ran out on the tournament’s last day, and she ultimately busted in 7th place.

Holz Takes the One Drop

Poker is a game where when skill meets luck, the less fortunate had best get out of the way. And when your opponent is the talented Fedor Holz who’s getting lucky, it’s impossible to beat him.

The 22-year old German defeated  Dan Smith heads-up for the bracelet in Event #67, the $111,111 High Roller for One Drop championship. It was the first of what will likely be many WSOP bracelets to come for the young superstar.

Holz didn’t make any mistakes at the final table and seemingly couldn’t miss a flop. Joe McKeehen, the 2015 Main Event champ, busted in 6th on a sick hand against Holz. That started a string of players hitting the rail. Before anyone could blink, the tournament was heads-up.

In the hand that started it all, the UK’s Jack Salter decided to limp under the gun with K♣10♣. Holz then limped on the button with A♥10♥. Brian Green made the call in the small blind with Q♦6♦. McKeehen checked his option with K♥6♥. The flop came 3♥J♥Q♥, giving Holz the nut flush and McKeehen only second-best. There was virtually no way Joe could avoid busting on this hand.

Green checked, and McKeehen followed by slow playing. Salter, on a semi-bluff with an open-ended straight draw that he didn’t know was already a dead hand if hit, fired 1,450,000. Holz, hoping to get more action, just called.

Green folded, and then McKeehen shoved all-in for 7,600,000. Salter folded and Holz snap-called. The defending Main Event champ was drawing dead. The 7♦9♦ on the turn were irrelevant.

The tournament went from six players to two in a matter of three hands. Soon after, it was heads-up between two of the best players in the world to have never won a bracelet.

Dan Smith late registered for this even, because he was busy finishing 3rd in Event #62, the $25,000 High Roller Pot-Limit Omaha. When he took his seat, he only had 25 big blinds. But he grinded his way to 2nd place nonetheless, which came with $3,078,094. Holz earned $4,981,775, his second seven-figure score this summer. His first such cash was at the Aria Super High Roller Bowl, where he took second for $3.5 million.

More than 1,700 players registered for Day 1B of the 2016 World Series of Poker Main Event, and 1,302 of them will be moving on today. Moscow’s Audrey Zaichenko left the Rio with the most chips bagged up on Sunday night (292,700). He’s quietly having a great WSOP, having cashed six times already and won a bracelet in Event #34, the $1,500 2-7 Triple Draw Lowball.

Four former Main Event champs made it through the day. Johnny Chan, Greg Raymer, Chris “Jesus” Ferguson, and Tom McEvoy all still have a chance at becoming a two-time winner. Chan has the biggest stack of all former champs thus far (160,800).

More former champs, including Joe McKeehen and Joe Hachem, will be entering the tournament on Monday.

On Friday, 1,247 players logged onto Nevada’s top online poker site to compete in Event #66, the $1,000 WSOP.com Online Poker championship. Once the tournament got down to six players, play stopped and will pick up live at the Rio on Monday at 11 am Pacific. First place will pay $210,279 and a coveted WSOP gold bracelet.

The final six players are:

Fedor Holz among the best in the world in just 22 years is the high roller guy. will we have a new Stu Ungar? the new kid poker, but if we compare with Stu Ungar at that time the field of juagadores were smaller very few players and style of play was very different than it is now playing, poker ah evolved a lot over the years . Fedor holz ah won several similar tournaments this with very high buyn face great players and beating them, it is a very complete player that adapts to the table and knows when to give up a hand and when to get the most value, know how to take good decisions in complicated hands is a Crack with a great future ahead.