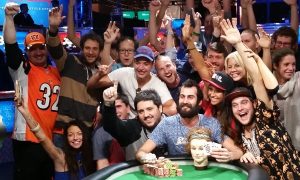 The World Series of Poker is made up of 68 events this year, but for many, the summer comes down to one tournament: the $10,000 buy-in No Limit Holdem Championship, better known as the WSOP Main Event.

And while it has been a long series with numerous storylines, controversies and memorable moments, it is finally time for the world’s most important poker tournament to begin.

But first, there are still a few preliminary events to wrap up before we can turn all of our attention to the Main Event.

Anthony Spinella, known on WSOP.com as casedimised, came to the Rio on Saturday and quickly put away the live final table to win the WSOP.com Online No Limit Holdem event.

The victory earned Spinella his first ever WSOP bracelet, as well as a prize of $197,743. The victory was fitting, as Spinella had been a highly-regarded online poker player in the past.

Ive got a bunch of six-figure scores online, but most of them were back in 2008 and 2009, Spinella said. But this is much better: I prefer live poker these days.

Spinella was among the many American online poker players who saw their lives changed dramatically on Black Friday: first for the worse, and then for the better, he says, as he had to relocate to continue playing in the biggest online poker games, eventually settling on Playa del Carmen, Mexico.

While Spinella felt right at home in the online portion of the event, he was still glad to play out the final table in the Amazon Room at the Rio.

Its obviously way more exciting to finish live, where you can have your friends and family come and support to, rather than it all ending so quickly online, he said.

It took just 20 minutes for Jack Duong to finish off a short-stacked Vitezslav Pesta and seize a victory in the $1,500 Bounty No Limit Holdem event on Saturday afternoon.

Pesta was able to double up once and threatened to make it a match, but was done in by a cooler, as Duongs pocket kings were well ahead of his pocket jacks when all of the money went in pre-flop on the final hand of the tournament.

Duongs win earned him his first ever WSOP gold bracelet. It also came with a $333,351 prize, one that couldnt have come at a better time for the winner.

I was having a terrible series up to this point, he said after the tournament ended. I bricked everything. I was stuck like $75,000 coming into this tournament.

The tournament was the first time the WSOP hosted a bounty event, with players earning $500 for each player they busted throughout the course of the tournament. Duong busted 11 players, and also got to keep his own bounty, adding a total of $6,000 to his prize money.

Christopher Vitch holds the chip lead heading into what will be the final day of play in the $1,500 Seven Card Stud Hi/Lo event. Just three players were remaining when play ended on Saturday night, with Vitch holding a slight chip lead over the UKs Gerald Ringe.

Daniel Idema will be the short stack when play resumes this afternoon. When Vitch and Ringe are both looking for their first career bracelet, Idema would be celebrating his fourth career WSOP win and his second of the summer if he were to stage a comeback and win this tournament.

The money bubble broke just before the end of play on Saturday in the $10,000 Dealers Choice Championship, and now just 12 players remain in contention for the first ever high buy-in bracelet in this format.

Leading the way is two-time bracelet winner Rep Porter, who bagged 558,500 chips to give him the advantage over Jeff Madsen, who sits in second place.

There are plenty of other big name professionals remaining in this event, all of whom are looking to bulk up their WSOP resumes by scoring a win in the last tournament before this years Main Event. Among them are David Benyamine, David Chiu, and Paul Volpe, who has less than 100,000 chips heading into the final scheduled day of play.

Rocco Palumbo of Italy will come into Sundays session as the chip leader in the $777 Lucky Sevens No Limit Holdem tournament, as 61 players are still in contention for the $487,784 top prize. All of the players still alive for the title have already clinched at least $6,593 in prize money.

There are several notables still alive in the tournament, some of whom are near the chip lead. Both Matt Matros and Faraz Jaka have top ten stacks, while Joe Kuether and Kevin MacPhee are also still in the hunt.

Sunday was scheduled to be the final day for any preliminary events to finish, but thats not likely to be the case.

While the $1,500 Seven Card Stud Hi/Lo and $10,000 Dealers Choice Championship will end today, theres a good chance that the Lucky Sevens event will spill into Monday instead, making it the final preliminary event to end this summer.

But while the final tables that will be played out today and tomorrow are important, there will be one tournament on everyones mind starting Sunday: the 2015 WSOP Main Event. The $10,000 buy-in championship begins today with the first of three starting days.

It will almost certainly be the smallest of the three starting days as well: traditionally, most recreational players come in for the final starting day in order to save on travel costs, meaning that the starting flights tend to build from small to big over the various days people can begin play.

There may not even be 1,000 players in the Rio Convention Center for the Main Event on Sunday, but there will still be plenty of buzz: the event everyone has been waiting for all series is finally here.