John Monnette is becoming the Karl Malone of the 2016 WSOP. Like the former NBA superstar, he keeps getting close to a World Series of Poker title, but can’t quite seem to get over the hump.

Monnette has quietly been one of the top performers this summer. He has eight cashes, six of those in the top nine. His closest call came in Event #7, the $1,500 2-7 Draw Lowball. But he finished 2nd and lost to Ryan D’Angelo heads-up. 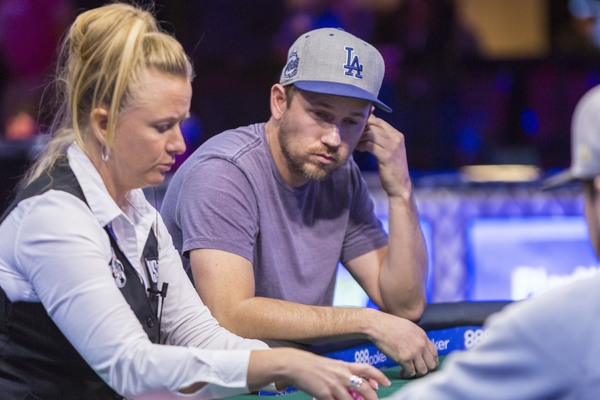 John Monnette couldn’t quite cross the finish line in Event #60, the $1,500 Stud Hi-Low 8 or Better, on Thursday. Monnette took third place, while David Prociak got the gold. (Image: pokerphotoarchive.com)

On Thursday at the Rio in Las Vegas, the 2012 bracelet winner had another “close but no cigar” moment. In Event #60, the $1,500 Stud Hi-Low 8 or Better, Monnette busted out in 3rd place, right behind Brandon Shack-Harris and the eventual champion David Prociak.

Failing to win a title doesn’t undermine the success he’s had this summer, much like Karl Malone’s legacy isn’t tainted because he never won a championship. Sometimes the breaks just don’t go your way. The breaks did go Prociak’s way at the final table, though.

He played great poker and caught cards. That’s a tough combination to beat. The victory was his first at the World Series of Poker and just his third career cash. Shack-Harris, the runner-up, is also quietly having a stellar series. This was the third time this summer he finished in the top five in a WSOP event. That includes a bracelet in Event #51, the $10,000 Pot-Limit Omaha.

Brothers Michael and Robert Mizrachi have taken the 2016 WSOP by storm. The duo combined for 19 cashes and one bracelet (Robert in Event #3, the $10,000 Seven Card Stud) this summer heading into Event #62, the $25,000 High Roller Pot-Limit Omaha championship.

There are 20 players remaining out of 184 initially. The tournament is scheduled for four days. A victory by a Mizrachi would give the family eight lifetime wins. Michael trails Robert 4-3. If we add in The Grinder’s fraternal twin, Eric, the Mizrachi’s have two additional small cashes this summer.

Doug Polk Team in the Lead

Event #61, the $1,000 Tag Team No-Limit Hold’em, is down to the final table of nine. The chip leader is the Doug Polk-Ryan Free team. They have 1,243,000 chips, which is nearly double the nearest competitor.

It’s been a rough summer for Polk. He hasn’t had much success in WSOP events, was called out by a bunch of social justice warriors on Twitter recently for making insensitive racial comments, and his “bad reg” accusation about Jason Mercier is looking, well, just silly now.

But he will have a chance to chasten his critics on Friday. That being said, his partner will likely be doing most of the playing at the final table. Polk is registered for Event #67, the $111,111 High Roller for One Drop. That tournament kicks off at 1 pm Pacific, an hour after the final table begins.

All players on the winning team earn a gold bracelet and the players split the 1st place prize money ($153,358). Polk’s cut, should his team win, won’t even be enough to cover his buy-in for the One Drop.

Another big name, Jonathan Little, is at the final table. Team Little includes the tournament poker superstar and his mom and dad. They are last in chips heading into Day Three.

Friday is a big day at the Rio, with the Main Event just a day away. The High Roller for One Drop NLH, Event #67, will attract many of the top high-stakes pros in the world to Las Vegas. This three-day event will conclude just in time for the final table participants to enter the Main Event before registration closes.

Event #59, the $5,000 No-Limit Hold’em, is now down to the final six players. We’ll have it settled by the end of the day on Friday. Yue Du leads the way, but he’ll have to fend off talented pro Dominik Nitsche for the bracelet. Du has a massive chip lead, but anything can happen in no-limit hold’em.

Two other great events get underway on Friday. The second annual Event #66, the $1,000 WSOP.com Online No-Limit Hold’em, will play down to a final table online today, with the last six players coming to Las Vegas and the Rio Monday to play it out. The will begin at 11 am PT next week.

Today, online players may rebuy as many times as they want today.

We’ll leave all the political humor thought clouds for you to fill in.