One of the coolest things about the WSOP is watching people go from rags to riches in a matter of days. After winning $888,888 on Monday in Event #54, the Crazy Eights Eight-Handed No Limit Hold’em championship, Ohioan Hung Le explained why this money is so important to him. 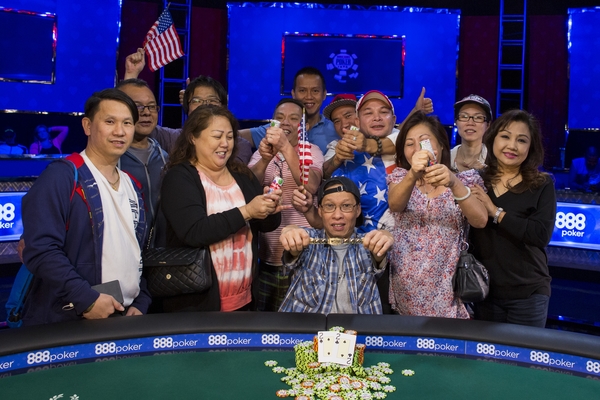 God Bless America: Ohioan and Vietnamese immigrant Hung Le said his five kids made his Crazy Eights win even sweeter. Le, a salon owner, is one of the few “everyman” winners in this year’s World Series. (Image: pokerphotoarchive.com)

“I have five kids,” he said. “We are a lower-middle class family. We work hard. This is life changing money for us.”

The 53-year old Vietnamese recreational poker player bested a field of 6,761 in the inaugural event that was sponsored by online site and WSOP partner 888poker.

This was the first major poker tournament he had ever entered. And Le even admitted afterwards that he felt outclassed by his opponents. He made quite a few questionable decisions at the final table.

“I came out to Las Vegas to get lucky,” Le admitted. Mission accomplished, sir.

Le is a nail salon owner. This ought to pay for a lot of new colors for the ladies.

Channeling his inner Edgar Allan Poe on an ESPN WSOP broadcast years ago, Mike Matusow affectionately rhymed, “poker, poker, it’s all skill, start with the worst hand and go uphill.” Hung Le bought into that philosophy and is now a WSOP champion.

Georgios Sotiropoulos did not have a happy Independence Day. The Greek high stakes poker pro was the Much-dreaded bubble boy in Event #55, the $50,000 Poker Players Championship. He walked away with nothing, just one spot away from the money, on Monday. That’s always an extra-painful spot to bust in.

Up until July 4th, Sotiropolous had fared quite well in this year’s World Series. He has six cashes to date, including a 5th place finish in Event #8, the $1,500 H.O.R.S.E championship.

On a positive note, 14 players are guaranteed money with two days of play remaining. That includes brothers from one of poker’s first families: the Mizrachis. Robert Mizrachi busted out in 14th place ($75,833). And his brother, Michael, is still alive with 2,016,000 chips, which means he starts play today at 2 pm PT in the fifth spot.

The remaining 13 players are all chasing Justin Bonomo (3,127,000). The poker pro with the shot of hot pink in his hair already has three top three finishes this summer. All he needs now is a bracelet to cap off what’s been a stellar 2016 WSOP.

Daniel Negreanu hasn’t won a bracelet since 2013, and will need to run as lucky as Hung Le did on Monday to have a chance in this prestigious event. Kid Poker is just one spot above Gorodinsky, with 995,000 chips in his stacks.

The final table will play down on Wednesday at the Rio in Las Vegas. A title in this event is worth $1,296,097.

Phil Hellmuth made it to Day Three of the Poker Players Championship with a small stack and was unable to run it up. The Poker Brat was eliminated early on Day Four by Jason Mercier. He walked away with no cash.

It’s been a rough summer for the 14-time bracelet winner. He only has three cashes, one deep run, and no new jewelry. With only a few more opportunities to win gold before the Main Event, Hellmuth might have to concede that 2016 isn’t going to be a historical one for him.

Tuesday is going to be another crazy day at the Rio. On top of what we already discussed, three tournaments are expected to play down to a winner:

incredible tournament with over 6,000 players deserved congratulations prize that money ABLE ensure a better present and a better future for you and your whole family.