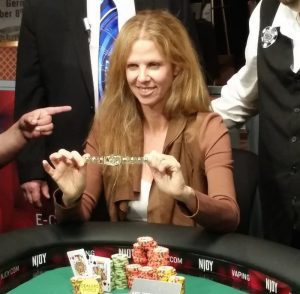 The World Series of Poker’s annual celebration of women’s poker, the Ladies Championship, will crown a winner on Sunday.

But the first female winner of the series came one night earlier, when a screenwriter from Los Angeles beat some of poker’s best in one of the toughest tests of the entire WSOP.

The $1,500 Dealers Choice event is a true test of a poker player’s skills, as anyone in the tournament is likely to play each of the 18 games on the menu at some point in their run.

That would seemingly make it an event designed for high stakes professionals who regularly play games that aren’t commonly spread in every local casino.

But in the end, it was an amateur who took the title in unlikely fashion. Carol Fuchs came out on top at a very tough final table that included the likes of Chris Klodnicki and last year’s winner, Robert Mizrachi, to win her first bracelet and a $127,735 prize.

Fuchs, a Hollywood screenwriter and producer, became the first woman to win a bracelet this year. Her credits include writing the screenplay for “No Reservations,” a 2007 romantic comedy starring Catherine Zeta-Jones and Aaron Eckhart.

Fuchs, who started playing poker when she couldn’t find opponents for other card games like gin, said that the fact that she isn’t a professional poker player may have actually helped her out at the final table.

“I don’t make my living as a player, so it’s just fun for me,” Fuchs said following her win. “If I bust out, it’s not my payday.”

In heads-up play, Fuchs chose to play Omaha Eight-or-Better time and again, while her opponent, Ilya Krupin, picked No Limit Hold’em as his game of choice.

Ultimately, Fuchs won the title by taking down a decisive Hold’em hand when Krupin was very short: an unexpected ending, as she said that it was her weakest games in the mix, at least in comparison to the professionals she went up against throughout the tournament.

But while Fuchs usually plays Pot Limit Omaha cash games back in Los Angeles, and says that Omaha Eight-or-Better is her favorite tournament game, she was comfortable with just about everything in the mix. In fact, she said that at least one game she rarely plays proved to be good for her.

When prompted to compare her win to getting a movie made in Hollywood, Fuchs paused for a second to think about the two very difficult feats.

“I don’t know, which is harder? They’re equally difficult,” she said.

Jason Mercier is looking for his second bracelet this year, as he holds the chip lead in the $10,000 Pot Limit Omaha Championship with only 21 players left in the field.

Mercier bagged nearly 1.2 million in chips, more than 300,000 ahead of his nearest competitor, Vadzim Markushevski.

Mercier will see plenty of familiar faces on Sunday, as a number of notable pros are still in the mix. Dan Smith, Davidi Kitai, Shaun Deeb and Hasan Habib all bagged top ten stacks heading into the final scheduled day of play.

Just ten women are still in contention for the 2015 Ladies No Limit Hold’em Championship, with Russia’s Liya Gerasimova leading the way heading into Sunday. No matter who walks away with the title (and the $153,876 in prize money), it will be their first ever bracelet win; for many of the women still alive in the tournament, this represents their first World Series cash as well.

The tournament managed to play down to two and the end of the night, leaving only the winner to be decided. Cahill and Liberto will return on Sunday to finish their heads-up duel, with Cahill holding a little over a 3-2 chip lead. The winner will take home $640,711, along with their first bracelet.

The DraftKings 50/50 No Limit Hold’em tournament debuted on Saturday, and given the structure that paid out half the field, it was no surprise to see the money bubble bust on Day 1.

Just 211 of the 1,123 players who started the event will come back for Day 2, with everyone still in the tournament having secured at least a $1,500 prize to cover their buy-in.

Marcus Mack has the chip lead heading into the second day of play, as the field continues to pursue the first place prize of just over $200,000. Some of the biggest names still in the field include Matt Matros, Dutch Boyd, and Allen Kessler.

The $5,000 Turbo No Limit Hold’em event saw a field of 454 reduced to just 54 after one day of play, with Igor Yaroshevskyy taking a large chip lead at the end of Saturday night’s session.

David Benefield and Blair Rodman sit in second and third places respectively, while Shannon Shorr, Eric Baldwin, Mike Watson, David Sands and Stephen Chidwick are just a few of the famous faces still in the field.

Sunday could prove to be a busy day for bracelet winners, as both the Ladies Championship and the $3,000 No Limit Hold’em Six-Handed events will play down to winners without a problem.

They’ll likely be joined by the $5,000 Turbo and perhaps the Pot Limit Omaha Championship, making a four-bracelet day a real possibility.

But the biggest event of the day will be one that is just starting rather than one that is wrapping up. The $111,111 buy-in High Roller for One Drop will begin at 1 pm, likely attracting most of poker’s biggest names.

It’s hard to predict exactly what the field size will be, but don’t expect the same limited field that comes out for the $1 million Big One for One Drop; the last time this event was held in 2013, a total of 166 players took part.

Calling any win in a poker tournament, especially at a lower buy-in, an ‘upset’ is just ignorant. In this case it’s probably sexist.