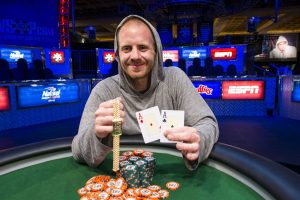 One final table played out on Wednesday, and Jesse McEuen came out on top to take home some 2014 World Series of Poker gold in the Ante Only tournament.

Quite a few eyes were also on the $50K Poker Players Championship (PPC) as well, as the elite field played down into the money and then toward a final table. Melissa Burr is one of the few women to have ever played the event, and she became the first to ever cash in the PPC. She now heads to the final table in an attempt to keep Brandon Shack-Harris from winning his second WSOP bracelet of the summer, while strong players like Abe Mosseri and John Hennigan try to capture the PPC title and trophy.

Stay tuned for the results of the PPC and more WSOP action.

Despite a much lower turnout than last year, the Poker Players Championship remains one of the most-watched events of the summer. The 2014 PPC began with these numbers:

Day 2 set the field but also cut it in half. Day 3 started with 55 players and reduced it to 22. Day 4 then eliminated quite a few players early in the day, like David Oppenheim, David Steicke, and Gary Benson. Then Brandon Shack-Harris eliminated Elior Sion in 15th place on the money bubble.

Robert Mizrachi was the first to cash for $99,388, and Jonathan Duhamel and Matt Glantz followed. Todd Brunson took home $115,447 for 11th place, as did James Obst for tenth and then Scott Seiver for ninth place. The final table of eight players was then set for today as follows:

The Ante Only event turned out to be a popular one and brought in a solid crowd:

Day 2 thinned the field from 80 players down to the final table. Day 3 started that action with Jeremy Joseph as the chip leader and Jesse McEuen in fourth. Joseph had a tough time and exited early, though, while McEuen made it to heads-up play, albeit with a chip deficit. But McEueun fought hard against Jonas Lauck and emerged with the bracelet.

The only new Tuesday tournament drew a big field with 55 more players than the year before:

Day 2 brought 152 players back to the tables, and it didn’t take too long for the money bubble to burst. Some of the players who made it to the cashier cage after that included Ari Engel, Vitaly Lunkin, Chris Bell, Joe Hachem, John Cernuto, and Phil Ivey.

After the 12th place elimination of Jared Koppel for $15,278, play stopped with 11 remaining and nearly a final table. The stacks returning for the final day are:

The turnout for this tournament was impressive but still nearly 100 players less than last year’s registration numbers:

When play stopped at the end of Day 1, there were still 204 players in their seats, quite a bit away from the money. Of those players, though, there were a few in very good chip position atop the leaderboard:

Quite a few players were up for the low buy-in eight-game tournament, which resulted in these registration stats:

The first day of action, which started at 4pm, thinned the field down to just 106 players, with the top five showing up on the leaderboard as:

Events 46 and 48 will play until winners are determined.

Events 49 and 50 will play into the money and on toward their respective final tables.

Event 51 ($1,500 NLHE Monster Stack) begins at noon, but recently changed to offer two flights of starting players, though no reentries are allowed. The tournament was selling so many seats that the demand prompted a new way to handle the massive starting field. Event 52 ($10K LHE) will begin at 4pm if there is room for it anywhere in the Rio Convention Center.