Kristen Bicknell proved on Thursday that poker is anyone’s game in the right and talented hands. It took 29 days and 46 events at the 2016 WSOP for a woman to win a bracelet. And it was the Canadian-born Bicknell who took down Event #46, the $1,500 Bounty No-Limit Hold’em, for $290,768. She beat out an impressive field of 2,158 players to earn her bling and the cash that went with it. 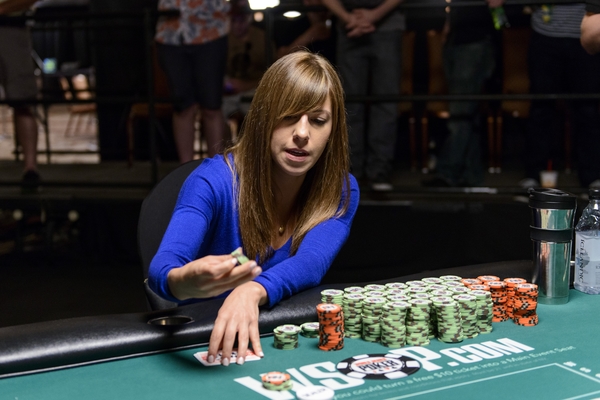 We’ll have what she’s having: Health food aficionado Kristen Bicknell made World Series of Poker 2016 history by becoming the first woman of the season to win a gold bracelet. She beat out a field of 2,158 in Event #46, the $1,500 Bounty No-Limit Hold’em. (Image: pokerphotoarchive.com)

The 29-year old part-time poker player scored her second career WSOP title. She won the Ladies event in 2013. Bicknell was understandably ecstatic following her victory. The final hand played out like this:

“It all feels so surreal. But it almost doesn’t feel true,” she said immediately after beating Szecsi. “When you bust from a tournament, you feel so bad. But when you win it’s such a weird feeling.”

Bicknell’s victory is good for the game, proving once again that women can compete at the highest levels in poker. That being said, less than six percent of the participants in the Millionaire Maker and Colossus events, the largest fields at the World Series this year, were female.

On Friday, Vanessa Selbst has an opportunity to become the second woman to win a WSOP event this year. The PokerStars pro is 9th in chips out of 12 remaining players in Event #50, the $1,500 Shootout No-Limit Hold’em.

Meanwhile, Bicknell, who emulates Daniel Negreanu with a healthy lifestyle of good diet and plenty of exercise, should now be able to afford a few more trips to Whole Foods for organic strawberries. Maybe there’s really something to this whole “taking care of yourself” concept.

Shaun Deeb Wins One for the Haters

Love him or hate him, one simply can’t deny that Shaun Deeb’s poker playing ability is top-notch. On Thursday, Deeb won his second career gold bracelet. This one was in Event #49, the $1,500 Seven Card Stud. His first came last year playing the $10,000 Pot-Limit Hold’em.

Prior to the start of heads-up play against Adam Friedman, the eventual champ received a pep talk from his friend and fellow poker pro Todd Brunson. It worked like a charm.

Max Pescatori finished in 3rd place. It was a great accomplishment, but not quite enough to pick up his fifth career bracelet. Katherine Fleck was in contention late, hoping to make it two-for-two for the ladies on Thursday. Alas, she busted out in 4th, but found solace in her first career WSOP cash and final table appearance.

Late in the day Thursday, Jason Mercier had a chance to bag chips in three separate events. We cannot confirm if that has ever happened at the World Series of Poker, but the likelihood isn’t great.

Live multi-tabling could be the basis for a new kind of poker workout routine, as you run from one hand to another.

Jason Mercier may be out of the $10,000 PLO, but many stars are still alive. Tommy Le tops the leaderboard with 2,100,000 chips heading into Day Three. The California resident has just nine career WSOP cashes and will need to play exceptional poker to win his first bracelet.

Brandon Shack-Harris and James Obst are right behind him in 2nd and 3rd place. Loren Klein, the recent winner of Event #45, the $1,500 Mixed No-Limit Hold’em/Pot-Limit Omaha, will kick off Friday with 760,000 chips (9th place).

Scott Seiver has 448,000 chips, a below-average stack. There are 28 players remaining. This tournament is scheduled to come to a conclusion later today.

Friday is an exciting day for us here at CardsChat. Event #54, the $888 Crazy Eights No-Limit Hold’em tournament begins. We have 18 players, including bracelet winner Ryan Laplante, on Team CardsChat for this event. They’ll be competing for “last longer” money among themselves, along with the $888,000 guaranteed first-place cash.

There will be four Day One starting flights, with two on Friday and two on Saturday. A winner will be announced on July 5.

beautiful woman and excellent juagadora beat out more than 2,000 players where they were inscristo recognized professional players, is the first woman to win a brazalate this year congratulations now Llava home the bracelet and 290,768 $