“Johnny World” defeated Michael Gathy heads-up for the title in Event #47, the $10,000 2-7 Triple Draw Lowball (Limit). The match pitted old school versus new school, with the elder Hennigan (age 47) coming out ahead, continuing to trend this year to show up the (relatively) younger players. 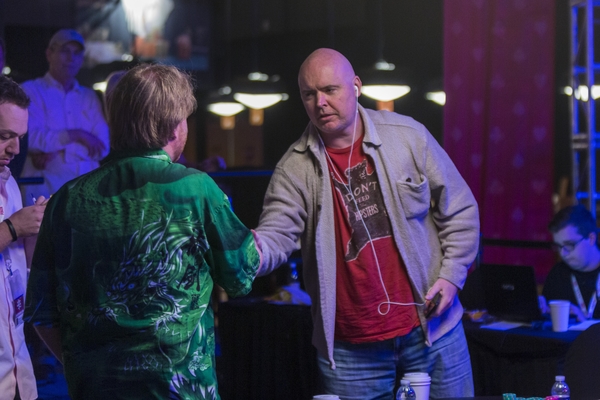 Jason Mercier has been the talk of his series for his play (and bet with Vanessa Selbst), but Gathy must now be added to that conversation. The Belgian online poker pro has a pair of 2nd place finishes already this year and a title in Event #35, the $5,000 Six-Handed No-Limit Hold’em.

As for Hennigan, who’s been known as one of the biggest gamblers on the poker circuit for years, “Johnny World” has now earned his fourth career gold bracelet. He took home $320,103.

Hennigan, at one point in the heads-up match, had nearly a 10:1 chip lead. But Gathy battled back and nearly got even. Then, Johnny World went on a run and crippled his opponent just before finishing him off.

J.C. Tran (who took 3rd) and Chris Klodnicki (4th) also made the final table. Dan Shak, Daniel Negreanu, and Dzmitry Urbanovich were among the 19 players who finished in the money, adding to the all-star flavor of this competition. 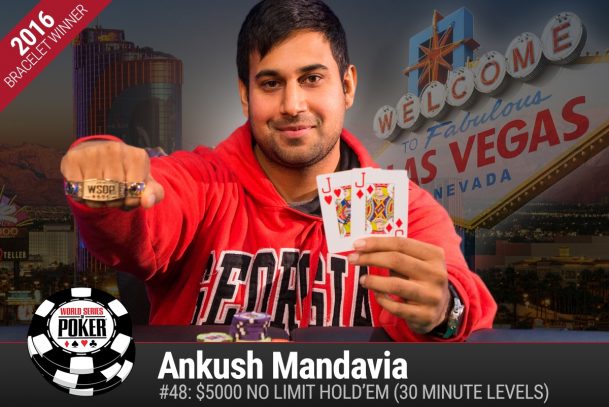 When play began, Mandavia held a slight chip advantage. But his opponent made a questionable call on the third hand, which essentially cost him a chance to win the tournament.

With two cards valued higher than his pair of 4’s, the California native was unable to find a fold on fourth street. He made the call and saw the bad news. With just three outs in the deck, the 7♦ river card not being one of them, Strelitz found himself with nearly a 10-1 chip disadvantage after that hand.

He never recovered. Mandavia won his first career bracelet for $338,774. He has 16 total WSOP cashes to his name now.

Cooper City, Florida resident Steven Wolansky is the champion of Event #44, the $1,000 No-Limit Hold’em championship. The bracelet he earned is the second of his career. He last won a WSOP event in 2014 in the $1,500 No-Limit 2-7 Draw Lowball.

Wolansky defeated Wenlong Jin in a long, intense heads-up match. The battle lasted across two days, with first place paying $298,849. There were 2,076 entrants in this bracelet event.

Event #51, the $10,000 8-Handed Pot-Limit Omaha, got underway Wednesday with 400 players registered. There will be 159 folks coming back for Day Two on Thursday at the Rio. Many familiar faces will be among the crowd.

Germany’s Steven Mueller holds the chip lead at start of play with 498,600 in his stacks. This would be his first-ever cash and bracelet if he can hold that spot to the end.

Rep Porter (293,700), Michael “The Grinder” Mizrachi (276,900), Joseph Cheong (224,800), and Jason Mercier (218,800) all finished Day One with a top-20 chip stack. Will Mercier get that elusive third bracelet of the summer? Everyone will be on pins and needles to see if the champ can get even champier in this one. Another win would almost surely seal up his Player of the Year chances.

Event #46 (which was supposed to play out on Wednesday), the $1,500 Bounty No-Limit Hold’em, is now down to its last three players. Kristen Bicknell holds the chip lead when cards get back in the air and will attempt to become the first female to win a bracelet in 2016. Bicknell won her first and only bracelet in the 2013 Ladies event.

Event #49, the $1,500 Seven Card Stud, has an exciting final table of eight talented pros in store on Thursday. Eugene Katchalov from the Global Poker League’s L.A. Sunset team holds the chip lead. Then Shaun Deeb is right behind him. Max Pescatori is also at the final table, seeking his fifth career bracelet. So this should be a fun one to watch play out.