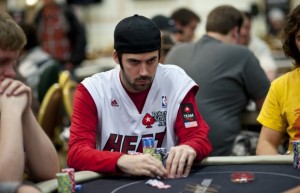 Event 44 of the 2014 World Series of Poker was supposed to have a champion, but no one anticipated the battle that would be the heads-up portion of the tournament. Jordan Morgan and Evan McNiff each want that first WSOP gold bracelet, and the two played heads-up poker until late into the night. They finally called it with nearly even stacks and decided to continue play today.

Meanwhile, the Poker Players Championship has thinned its field to just 55 players. Day 3 will bring that number down further today, though the money only comes into play for the top 14 players and may not be seen until tomorrow. The field remains stacked, though, so fans who want pictures of some of the world’s top poker players should head to the Rio today.

We’ll let you know how it all plays out.

This $1,500 NLHE event was supposed to run for three days and started with these stats:

Day 2 took the field from 212 players into the money and left with just 15 survivors. Day 3 saw the likes of Roberto Romanello and Vinny Pahuja exit before the final table was set, and former chip leader Brandon Ageloff bubbled the table, taking home $27,337 for his tenth place finish.

The final table then began with Evan McNiff in the chip lead and Jordan Morgan behind. The two eventually made it to heads-up play with Morgan in front, but McNiff continued to come back. After nearly 200 hands of heads-up play, the two called it a night and will return for an unscheduled fourth day to play for the win.

This $1K NLHE started on Sunday and drew these numbers:

Day 2 brought 144 players back to the tables, all of whom were in the money and guaranteed at least $2,037. Play moved forward as names like Deanna Dozier, Pierre Neuville, Ryan Laplante, and Faraz Jaka exited. Some of the late-night bustouts included Ari Engel and Lily Kiletto.

Play stopped with 11 survivors of the day, the top five of whom were listed with these chip stacks:

The eight-game mix tournament that is the $50K Poker Players Championship finalized its field on the second day of play, and the numbers were quite significantly lower than last year:

Day 2 brought 80 players back to the tables and added the new ones. Though only five players exited on Day 1, the second day saw names like Daniel Negreanu, George Danzer, Phil Hellmuth, Scotty Nguyen, Gus Hansen, and Joe Hachem depart as well.

The night ended with a few very short stacks, Doyle Brunson being the shortest with just 11K chips, but the top five of the 55 remaining players on the leaderboard were:

The only tournament that started on Monday was a $1,500 Ante Only event, and there were plenty of people intrigued enough to register, even more than last year. These were the final numbers for the 2014 event:

Play was fairly quick on the first day, as just 80 players made it through. The vast majority of them will make the money, with these five feeling good about that while sitting at the top of the leaderboard:

Event 44 will continue heads-up play until there is a winner.

Event 45 will play to and through its final table.

Event 46 will continue with its third of five days.

Event 47 will play into the money and as close as possible to a final table.