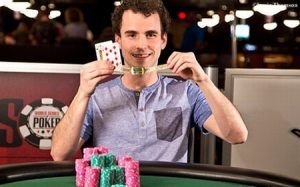 Some players were celebrating their final tables on Sunday. Dan Kelly and Michael Drummond had the most to celebrate when they won their bracelets late into the evening hours.

Quite a few poker fans, meanwhile, had their eyes on the $50K buy-in Poker Players Championship. There were two women in the field – Vanessa Selbst and Melissa Burr – but Selbst exited early as one of only five players to be eliminated on Day 1. Many other big names remained, however, and fans had their pick of poker stars to see from the rail.

The five-day tournament had yet to close registration, but only 80 players took to the tables thus far, quite a bit less than the 132 players who registered last year. The prestige of the event remains, but the desire to play it may have fallen quite significantly. Day 2 will tell.

With 52 more players than the previous year, this tournament kicked off with these numbers:

Day 2 took the field from 96 players, into the money at 48 players, and to the end of the day with just 13. Those dozen plus one returned on Day 3 to see players like David Baker and Sorel Mizzi exit early. Richard Ashby then bubbled the official final table and took home $48,011 for the seventh place finish.

Phil Laak was the first to exit the final table as Darius Studdard maintained a chip lead. But Michael Drummond had the dominating stack going into heads-up play, and it took only 12 hands to win the bracelet.

Hundreds of players wanted some limit poker action and took to the tables for these final registration numbers:

Day 2 thinned the field from 118 players and down to the final table of nine. Dan Kelly led Day 3 and took a significant lead into heads-up play against Yegor Tsurikov, eventually grinding him down and taking home his second bracelet.

The Saturday event was another $1,500 NLHE that showed these stats:

Day 2 began with 212 players and quickly made the money for the top 198 of them. As play moved on, some of the competitors who cashed included Loni Harwood, Yevgeniy Timoshenko, Harrison Gimbel, and Randal Flowers.

The 16th place elimination of Aditya Agarwal for $17,234 was the last of the night, ending it with 15 players and the likes of Roberto Romanello and Vinny Pahuja still in the running. The top five on the leaderboard were:

The first tournament on Sunday was another $1K NLHE, and it drew a big crowd:

Day 1 moved along rather nicely and burst the money bubble late in the evening. Among the players who cashed for at least $1,872 were Eoghan O’Dea, Andy Frankenberger, Alex Bilokur, Kara Scott, and Taylor Paur. Play ended with 144 still in action and these five at the top of the unofficial chip counts:

One of the most anticipated poker tournaments of the year is this PPC, which offers an eight-game mix and the guarantee of some of the very biggest names in poker. It kicked off at 4pm on Sunday with these numbers, though registration remained open:

Of the first day’s entrants, five of them exited the five-day tournament already: Vanessa Selbst, Dan Shak, Sergii Baranov, Michael Glick, and Phil Galfond. The rest were preparing for Day 2 and hopefully more days to come, with these five players at the top of the leaderboard:

Event 44 will play until it declares a winner.

Event 45 will attempt to get to a final table.

Event 46 will play its second of five days and set the final field when registration ends.

Event 47 ($1,500 Ante Only NLHE) is the only starting tournament for the day and will kick off at noon.