It’s been a successful World Series of Poker 2016 for George Danzer so far. The Brazilian who now calls Austria home won his fourth career bracelet on Monday. This one in Event #43, the $10,000 Stud Hi-Low Split-8 or Better beating out an initial field of 136. Although it may not have been a large starting field, it was certainly an elite group to wade through for Danzer. 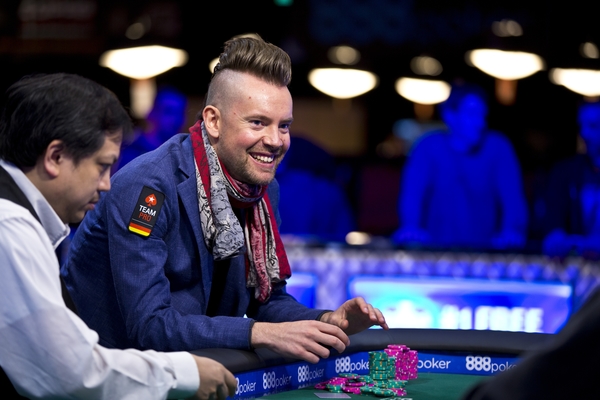 George Danzer is all smiles for his fourth WSOP career bracelet after taking down Event #43, the $10K Stud Hi-Lo Split-8 or Better, on Monday. He beat out an elite field of mostly fellow poker pros for his $338,646 win. (Image: pokerphotoarchive.com)

Earlier in the month, he finished 3rd in Event #3, the $10,000 Seven Card Stud championship. He likely won’t be able to catch Jason Mercier for Player of the Year honors. But he’s quietly been one of the most consistent performers at the WSOP the past few years.

Danzer now has four career bracelets and has won more than $2.2 million lifetime at the summer series. To win this one, he had to defeat a tough final table.

Justin Bonomo began the third and final day with the chip lead, but busted out in 3rd place. Randy Ohel was the runner-up, his fifth top ten finish this summer. Ohel now has 25 career cashes and surpassed the $2 million mark lifetime at the WSOP on Monday.

Todd Brunson, who last won a Series bracelet (his only one to date) in the $2,500 Omaha Hi-Low eleven years ago was hoping to catch #2 on Monday, but couldn’t make it happen. He began Day Three as third in chips, but ended up busting in fifth place for $79,381. He has 50 cashes to his name over the years in the World Series, so this must have been a disappointment for the poker pro and son of a legend.

Eli Elezra (6th) and David Grey (8th), a pair of old-school poker stars, made it to the final table. But none of them could outlast Danzer.

“The Dragon” With a Monster Stack

David “The Dragon” Pham is the chip leader in Event #41, the $1,500 Monster Stack No-Limit Hold’em, which resumes play at 11 am today at the Rio. Hoping for a third bracelet, Pham very well could be two days away.

Pham, despite being the chip leader and an extremely talented player, isn’t the biggest story in this event, though. That honor goes to the incredible run of 76-year old poker legend T.J. Cloutier. The six-time bracelet winner and Poker Hall of Famer has 4,600,000 chips heading into Day Four.

Regardless of the final outcome, Cloutier’s performance is another reminder that seniors can still compete with the best of them. If he makes the final table, he’ll have quite a vocal cheering section waiting for him.

Unfortunately, we won’t have the opportunity to do a winner’s interview with CardsChat contributor Chad Holloway. Heading into Day Three, Chad had nearly 1 million chips, but got off to a tough start. He picked himself back up and surpassed the million-chip mark at one point.

But it wasn’t meant to be. Holloway busted out in 81st place, winning $11,942. Although Tuesday was originally scheduled to be the last day of play, the enormous starting field put the event one day behind. The tournament will play down to the final table today, and then make its way to a winner on Wednesday.

Galfond has two career bracelets, with his last one being in this same event a year ago. But he’s more focused on cash games these days than winning bling.

Tuesday marks the start of Event #48, the $5,000 No-Limit Hold’em championship. This will be just a two-day event and blind levels will be a quick 30 minutes to speed things up. Event #49, the $1,500 Seven Card Stud, will also get underway and is expected to be completed after three days of play.

Congratulations George Danzer for your four bracelet in the World Series of poker, though many jugdores will not nscribieron in the tournament was for the cost of entry or also the mode of the game, it’s a complete player for that belongs to the group of professionals Pokerstar