WSOP Day 22 saw one more gold bracelet handed out and Jason Mercier continuing to chase his third bracelet of 2016. 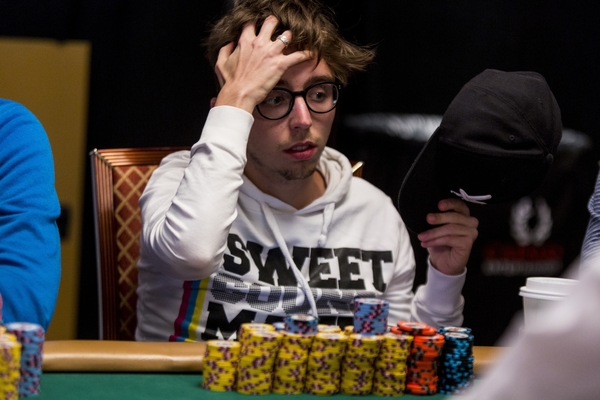 What to do, what to do?: Italy’s Alessandro Borsa, who will kick off Thursday’s action as fifth in chips in Event #33, the Summer Solstice No-Limit, contemplates his next move on Wednesday. Seventeen players, including Kathy Liebert, come back to play today at noon PT. (Image: pokerphotoarchive.com)

There are 13 players left in the field, including Per Hildebrand and Fabrice Soulier, so Mercier will have his work cut out for him. Even worse, only two other players (Wayne Diep and Bryce Yockey) have fewer than his 96,000 starting chipstacks. Mercier barely has more than three big bets left.

But anything can and does happen in poker. He’s been on a sicker heater before than is needed to win this tournament. The odds may be stacked against him, but everyone at the Rio will be paying attention to see if Jason wins that elusive third bracelet of the summer, and sixth of his career.

Is it Finally Koon’s Time?

Jason Koon is a talented high stakes poker player, and he’s had some success at the World Series of Poker in his career already, having cashed 32 times now, but he can’t claim to be a bracelet winner. Yet.

Koon is second in chips entering the third and final day of Event #35, $5,000 Six-Handed No-Limit Hold’em with 21 players remaining. The tournament began with 541 bracelet hopefuls on Tuesday.

First place will pay $560,843, but for a player such as Koon, the bracelet is what matters most. He’ll have a tall task on Day Three. The remaining field includes 2014 Main Event runner-up Felix Stephensen, and high stakes pros Jonathan Little and Pratyush Buddiga.

Liebert On Track for First Bracelet Since 2004

Kathy Liebert was once one of the most recognized female poker players. A decade or so ago, she was a regular on poker television programs such as Fox Sports’ Poker Superstars, the old show on which poker pros fought it out for that very title.

Now, she’s a regular in cash games and tournaments at the Venetian in Las Vegas, as well as famously outspoken on social media. On Thursday, she will attempt to go from the bottom to the top in Event #33, the $1,500 Summer Solstice No-Limit Hold’em.

Liebert has just 242,000 chips, which isn’t much compared to chip leader Adrian Mateos’ stacks of 1,763,000. But in no-limit hold’em, it only takes a couple of hands to turn things around. She’ll be going for her first bracelet since 2004, when she won a $1,500 Limit Hold’em event. It remains Liebert’s only WSOP title.

This tournament started with 1,840 players and has now dwindled down to the final 17. Jason Wheeler and Chris Moorman are two talented pros who would love to win a bracelet this time. That could happen on Thursday. 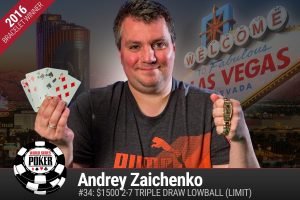 Zaichenko beat out 358 players for the gold, including Jameson Painter heads-up. This was his first career bracelet, and it’s been a long time coming. Zaichenko has 32 career WSOP cashes and had already made more than $1,000,000 lifetime cashes in the summer series.

Coming up on Thursday at the Rio are a pair of interesting tournaments. Event #39, the $10,000 Six-Handed No-Limit Hold’em, is sure to bring out many of the top high stakes no-limit players in the world. Expect an exciting final table on Saturday. And Event #40, the $2,500 Mixed Triple Draw Lowball/Badugi, will also be getting underway.

If you’re in Las Vegas, Thursday is a great day to beat the heat and head over to the nice cool air-conditioned Rio. The World Series of Poker will be hosting three final tables in one day, and, who knows, maybe Jason Mercier will be seated at one of them.

It’s a feat worth watching for.