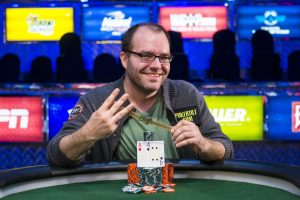 Dutch Boyd quite happy with his third piece of WSOP gold. (Image: WSOP)

The 2014 World Series of Poker is playing out as poker should. There have been a number of new faces at final tables, and even a few in the winner circles, but many of the bracelet winners this year are familiar faces. It reinforces the argument that poker is a game of skill with the numbers and stats to back it up.

Dutch Boyd captured his third bracelet by working through a $1K NLHE field, and Eric Buchman showed his Stud prowess by taking down his second bracelet in that tournament. Both had been there before, in front of cameras and holding that WSOP gold, but each time is a new experience and, in some ways, better than the last.

Meanwhile, Humberto Brenes has been showing his tenacity at this year’s Series by cashing in eight tournaments thus far. A deep run may be in the Costa Rican’s future.

It wasn’t one of the biggest $1K NLHE events of the year, but it was a solid field nonetheless:

Day 2 thinned the field from 115 players to just 10. They returned on Day 3, and the tenth place elimination of David Olmsted for $16,088 set the official final table.

Play was quite tough, especially as the night grew late. The only woman at the table, Pok Kim, exited in fifth, and former chip leader Will Givens took fourth. Dutch Boyd took the lead into heads-up play and captured the win in less than 20 hands.

Several hundred players came out for the low buy-in Stud event, which started with these figures:

The field had only 60 players at the start of Day 2 and played all the way to the final table and down to six.

Day 3 started with the quick elimination of Nabih Helmi in sixth and then Bryn Kenney in fifth. Play slowed a bit from there, but Eric Buchman was determined, taking a lead into heads-up play against the formidable Alex Kravchenko but defeating him in a relatively short period of time to claim his second WSOP bracelet.

The field was impressive in this $5K tournament, as quite a few more players show up this year than last:

Day 2 brought 170 of those players back to action, and the money bubble burst just after the dinner break, courtesy of Jeff Madsen eliminating an opponent in 57th place. Some of the players who cashed after that were Brandon Meyers, Michael Mizrachi, Steven Silverman, Brock Parker, Jonathan Duhamel, Dan O’Brien, and Nick Schulman. The 24th place bustout of Ludovic Riehl ended play for the night.

Of the 23 remaining players, Madsen led the group. The top five on the leaderboard were:

There was a solid level of interest in this low buy-in lowball tournament when it began:

Day 2 started with just 38 players and made it into the money in a relatively short period of time. Bryce Yockey was then the first to cash for $2,837, and others who followed included Max Pescatori, Mike Leah, Eli Elezra, Phil Hellmuth, Brian Rast, and Ali Eslami.

The final table then started and saw Adam Crawford and Scott Bohlman hit the rail before play stopped. The six players remaining will start Day 3 with these chip counts:

Pot Limit Omaha is quite the popular game now, and this low buy-in offering attracted a big field, though not as large as the year before:

The first day of play reduced the field to just 113 players, as the money bubble burst right at the end of the night to guarantee all remaining players at least $2,480. Robert Williamson III and Jeremy Ausmus were among the four who cashed, and play stopped quickly thereafter. The leaderboard showed these five players with the top chip counts:

The latest in the series of championship tournaments offered this $10K buy-in event:

The first day of play reduced the field to 75 players, quite a distance away from the money and setting up for an exciting second day of play. Going into that Day 2 with an advantage are these chip leaders:

Events 35 and 36 will find their champions.

Events 37 and 38 will play down to their final tables, or as close to them as possible.

Event 39 ($3K NLHE) is the only starting tournament of the day and brings players to the tables at noon.

Hope Boyd saves his money cause the book he just wrote isn’t that profitable the reviews I have read aren’t good.