Ian Johns just became a serious contender on WSOP Day 19. The Washington state resident joined some elite company by winning his second bracelet of the summer, and third overall. Jason Mercier is the only other multiple bracelet winner so far this year. 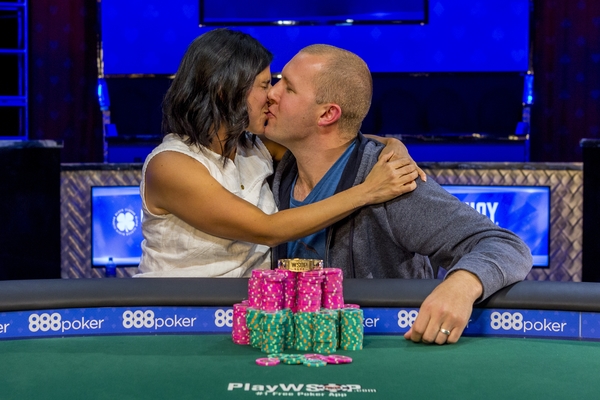 Feeling the love: Event #28 winner Ian Johns gives and gets a smooch on Sunday after taking down the $10,000 Limit Hold’em championship. (Image: pokerphotoarchives.com)

Most of his live tournament winnings have come at the Rio in Las Vegas in WSOP events. Johns only has a few other cashes elsewhere, including twice in World Poker Tour events in 2006 and 2007.

The reason the Washingtonian doesn’t have a better tournament resume outside the WSOP? He doesn’t play many other tournaments. Johns is a cash game specialist, which makes his run at the WSOP even more outstanding.

Not to take anything away from Mercier, because what he’s accomplished this summer is incredible, but one could argue Johns has been even more impressive, considering he focuses less on tournaments than his Floridian counterpart.

Johns also finished 21st in Event #24, the $10,000 H.O.R.S.E. Three deep runs is a rather amazing achievement for a player who focuses on cash games. And now, for the rest of the summer, it will be intriguing to follow Johns’ play as he tries to defeat Jason Mercier for Player of the Year, in what could well be a neck-in-neck race now.

He defeated Sean Berrios heads-up for the bracelet on Sunday. David Chiu finished in 5th place and Brian Rast busted out in 8th.

Seniors Event Down to Final Six

Originally, Event #27, the $1,000 Seniors No-Limit Hold’em championship, was supposed to end on Sunday after three days of play. But the tournament was only able to get down to the final six players before calling it a day last night.

First place will pay $538,204 later today. This seniors event was open to players ages 50 and above. On Sunday, Event #31, $1,000 Super Seniors No-Limit Hold’em kicked off for those ages 65 and above. That tournament had 1,476 participants and is left with 221 heading into Day Two on Monday.

After Day One, Grzegorz Trelski, a Connecticut resident, accumulated the most chips (444,000). He certainly isn’t a big name player, having cashed three times in his WSOP career. But many of the players who show up behind him on the leaderboard have familiar faces.

A few outspoken players, namely Shaun Deeb (433,000) and Matt Glantz (236,000), are in the top six at start of play. Glantz pulled himself away from Twitter and praising Donald Trump to play some poker.

Trelski will have his work cut out for him to hold off some top pros in order to remain atop the leaderboard.

Starting up fresh will be Event #33, the Summer Solstice No Limit Hold’em. This is a new event this year and will run for five days, so clearly WSOP suits are expecting a large playing field. Play kicks off at 11 am for that one at the Rio.

Later in the afternoon, at 3 pm Pacific time, the $1,500 2-7 Triple Draw Lowball Limit will get cards in the air for the start of the three-day Event #34.