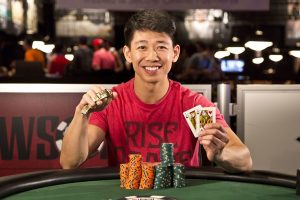 After a light day or two at the 2014 World Series of Poker, the weekend brought two more events; each day with lots of poker for players and fans alike.

Tommy Hang and Alex Bilokur each grabbed gold on Day 19, the first WSOP bracelet for each of them. They also beat some tough fields and final tables to earn the titles.

Rumors have yet to be confirmed of a player in Event 29 stealing chips from the stack of a player who hadn’t yet shown up to his table, but players on social media hinted of an arrest in the case. Quite a few incidents of stealing chips have been in the news this year, and it is somewhat surprising that anyone believes they can cheat in that way. The cameras are always on!

Speaking of always on, the WSOP rolls on with two new events and two big final tables on Sunday, June 15.

This smaller-than-usual low buy-in HORSE event started with these numbers:

After Day 2 thinned the field from 160 players to just 15 of them, Day 3 started with the 15th place elimination of Mark Gallo for $7,492. Adam Friedman followed, as did Jon Turner, Michele Limongi, Dutch Boyd, and Lonnie Heimowitz. Jared Talarico then busted in ninth place for $14,485, setting the final table with Stewart Yancik in the lead and Tommy Hang near the bottom of the leaderboard.

As Yancik faltered, Hang soared and took the most chips into heads-up play. Jim Collopy made some comeback attempts but never got there, as Hang soared into the winner’s circle.

This small but prestigious PLHE championship began with a modest field:

Day 2 played down from 66 players to the final 10, just one off the official final table. When Day 3 began, Dan Shak exited in tenth place for $30,516 on that bubble.

Chino Rheem took the reins at the start of the final table, as players like Barny Boatman and Todd Brunson exited early. Rheem ended up taking fourth place, and the next elimination of Alexander Venovski launched heads-up play with Matt O’Donnell in a dominating lead with 4.3 million chips to the 500K of Alex Bilokur. But the latter got aggressive, doubled up several times, and ultimately made the big comeback for the win.

With a much lower registration number than in 2013, the $2,500 NLHE event was still a grand affair:

Day 2 brought 209 players back to the tables, but worked into the money in the afternoon hours. Some who cashed going forward included Kyle Cartwright, Amanda Musumeci, Josh Arieh, Matt Affleck, and David Pham. The last player to bust was Isaac Baron, who took home $16,220 for the 21st place finish.

That left 20 players still in action, with players like David Benefield, Matt Salsberg, and Rep Porter still holding chips. The top five on the leaderboard, however, were as follows:

Quite a few players wanted in on the low buy-in Stud action, and these were the tournament numbers:

There were still 129 players at the start of Day 2, so the money bubble didn’t burst until later in the day. When that happened, players like Mike Watson, Andreas Hoivold, Hoyt Corkins, Maria Ho, Matt Glantz, and Chris Wallace cashed. The 13th place elimination of Alex Livingston for $7,588 ended play with 12 competitors bagging their chips. Former chip leader Jimmy Fricke was still in the tournament, but these were the top five:

As the 2014 games wore on, the $1,500 NLHE events became less popular, though this one held its own on a busy weekend:

There were still 187 players in contention when play stopped, just a few places off the money. Of those players, the official top five on the leaderboard were:

There were many Six-Handed NLHE events on the schedule last year, but none had the distinction of being a championship with a $10K buy-in. This year’s offering did well:

Only 97 players made it through the short-handed tabled event, and there were recognizable faces everywhere, including in this unofficial top five list:

Events 29 and 30 will play on and through their final tables.

Events 31 and 32 will try to set their final tables or get as close as possible.