On WSOP Day 18, Jason Mercier didn’t win a bracelet, although he is still in the running for yet another one that wraps up on Monday. Meanwhile, a few other poker players grabbed the spotlight.

One of those honors went to Benny Glaser, also a bracelet winner last year in the $1,500 Limit 2-7 Triple Draw Lowball. After Saturday’s action at the Rio in Las Vegas, the British player is now a two-time World Series of Poker champion. 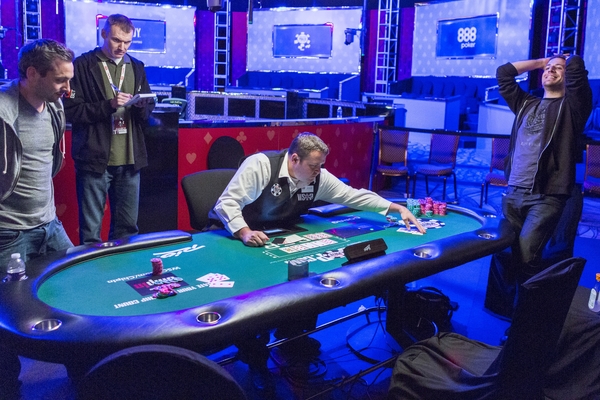 The agony and the ecstasy: Britain’s Benny Glaser (right) shows a happy poker face in his heads up match with opponent Benjamin Gold of California. Glaser took the title and $244,103 in Event #26, $1,500 Omaha Hi-Low Split-8 or Better. (Image: pokerphotoarchive.com)

It was almost a year ago that Max took down his own gold, his fourth, in the $10K Seven Card Stud Hi Lo event of 2015. He is definitely one of Italy’s toughest poker pros.

First Time for Everything

Unlike Glaser, Michael Gagliano, the winner of Event #25, the $2,500 No-Limit Hold’em championship, hasn’t been there before. A New Jersey resident and New York native, Gagliano scored the first bracelet of his career on Saturday.

He defeated a field of 1,045 players and won $448,463, the largest of his poker career in any tournament. Gagliano had already won almost $900,000 in live tournaments throughout his life. But now he can add “WSOP gold bracelet winner” to his poker resume.

Daniel Cooke, the 2nd place finisher, was playing from behind the entire heads-up match. He couldn’t ever catch up. But he won’t go home empty-handed. Cooke won $277,128, which isn’t bad as a consolation prize.

The Las Vegas resident is going for his fourth cash at the 2016 WSOP and second career bracelet. He won his first back in 2012 at the $2,500 2-7 Limit Triple Draw Lowball championship. Ohel will start play today with 273,200 chips.

Nick Schwarmann sits in 2nd place when cards hit the air today, with 228,200 chips in his stacks. He hails from Orlando, the city which just suffered one of the worst massacres in United States history and one of its worst weeks ever, with three back-to-back  tragedies. Hopefully his performance will give the folks back home something to smile about.

Fresh off one of his greatest tournament weeks ever, Jason Mercier will kick off today in the #36 spot with 95,200 chips, which is slightly above average. We wouldn’t discount him for anything after the ride he’s been on at the Series so far this year.

Event #28, the $10,000 Limit Hold’em, will play down to a winner on Sunday. The field has been reduced to 10 players, including a couple of big name pros.

David Chiu, a five-time bracelet winner and popular player during the poker boom era, has 554,000 chips left, which is about half of chip leader Jeff Thompson’s stack (1,047,000). Chiu has been a well-respected player for many years.

Also still in the bracelet hunt is Brian Rast, the 2015 Aria Super High Roller Bowl champion. Rast is one of the best players in the game today. He has 731,000 chips and will be tough to beat.

Ian Johns is second in chips (800,000). He’s fresh off his title in Event #8, the $1,500 H.O.R.S.E., just a few weeks ago. Should Johns win his second bracelet of the summer (and third overall), he’ll jump into contention with Mercier for Player of the Year, so much is at stake.

Event #27, the $1,000 Seniors No-Limit Hold’em championship, will play down to a winner on Sunday. There are 57 players left in the field, including Toto Leonidas, who is in second place. Paul Runge, seeking his first career bracelet, is the chip leader. Play resumes at 10 am PT.

The two new tournaments to start up on Sunday are Event #31, $1,000 Super Seniors No-Limit Hold’em Championship (for ages 65 and above), and Event #32, the $10K Omaha Hi-Low/8 or Better. Both tournaments are three-day events.