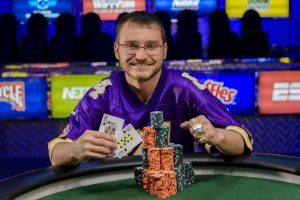 Kevin Eyster is a young, but very accomplished, online poker player, having accumulated approximately $3 million winnings thus far. His victory over Pierre Neuville on June 13 gave him a sizeable amount to add to his live winnings and a WSOP gold bracelet to go with it.

Andrew Rennhack also captured World Series of Poker gold yesterday, with his name being added to quite the prestigious list of bracelet winners thus far in 2014.

The two final tables that will play today include some big names, so expect fans around the rail and checking in with their phone apps to get updates on these tournaments.

The tournament started with these numbers and turned into a four-day event:

Day 3 started with only 17 remaining players but played down to heads-up without finding a winner. The two finalists came back on June 13 with Kevin Eyster leading Pierre Neuville, and the latter never gained much ground. It took less than an hour to finish and give Eyster the win.

This particular $1,500 NLHE event started with these details:

Day 2 thinned the field from 178 players to 12. Day 3 then began with the elimination of Christopher Symesko for $22,788, and Will Failla followed in 11th place for the same amount. Jonas Wexler then exited in 10th place to set the official final table.

Ryan Welch led the table of nine, but ended up finishing in fourth place. After Tony Gargano exited in third, Andrew Rennhack took the lead into heads-up against Michael Katz. The latter took over, but Rennhack made a crucial double-up and took it down just five hands later.

The $1,500 HORSE is typically a popular one, though the numbers dipped significantly from 862 players last year:

There were 160 players at the start of Day 2, and the bursting of the money bubble midway through the day garnered payouts for players like Barry Shulman, Roland Israelashvili, John Cernuto, Jeff Shulman, Huck Seed, and Chris Klodnicki. John Monnette departed in 16th place for $7,492 at the end of the night, leaving just 15 in contention for the bracelet.

Players like Jon Turner, David Baker, and Dutch Boyd were still in action, but these were the top five on the chip count list:

A relatively small field for this $10K championship event brought in these final numbers:

Only 66 players made it to Day 2, and play moved along with most players leaving sans cash. Timothy Adams ultimately busted in 19th place on the money bubble, and Tony Ruberto was the first one to cash for $21,341. Dani Stern followed, as did Don Nguyen, John Juanda, Humberto Brenes, Keith Tilston, Scott Seiver, and Erik Seidel.

That left 10 players at the unofficial final table, and all of the contenders are listed here:

This $2,500 NLHE was much later on the schedule than this year, perhaps explaining the stark difference in the registration numbers:

Only 209 players made it through the night, and of those competitors, these were the top five listed unofficially:

Registration for this low buy-in Seven Card Stud Hi-Low event was up slightly from last year, bringing in a good field for this 4pm-starting tournament:

There were only 129 players who ended the night with chips, and the leader of them all was none other than Jimmy Fricke. All five of them were:

Events 27 and 28 will play to and through their final tables.

Events 29 and 30 will attempt to reach their final tables.