Lest there was any lingering doubt, on WSOP Day 17, Jason Mercier proved his poker chops are indeed formidable. The Floridian who within just a week has now won two gold bracelets and taken second in a third event continues his dominance at the Rio this summer. 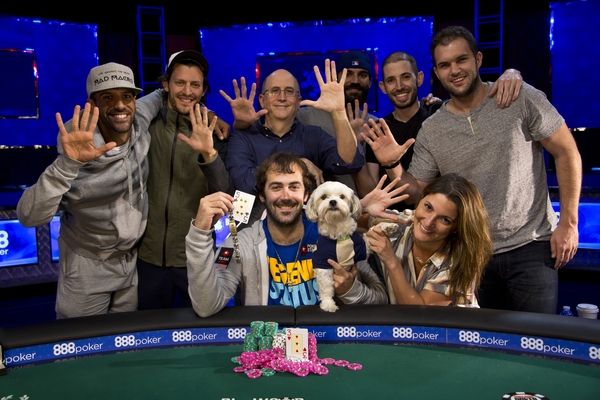 Top dog: Jason Mercier (holding a proud pup) continued his formidable run on Friday, taking down Event #24, the $10K H.O.R.S.E. championship, for his second gold of the summer. (Image: pokerphotoarchive.com)

But early on in the day, the PokerStars Team Pro dropped back to the pack following a rough start. That didn’t last long. Because the patient Mercier did what he does best: grinded.

By the time Nick Schulman busted in 3rd place, Mercier was still at a massive chip disadvantage against James Obst (6,230,000 to 2,500,000). Then things got even worse for the (at that point still) four-time bracelet winner. Obst quickly seized nearly a 10-1 chip advantage. It appeared to be all over, looking like Mercier would once again finish in 2nd place as he had just a few days earlier.

But then he went on one of his patented heaters. Mercier seemed to win every pot for the next half hour. And before anyone could blink, he grabbed the chip lead and had Obst on life support. Then Jason finished him off, winning his second bracelet of the summer, and fifth of his career.

To rehash things for you, Mercier and fellow pro Vanessa Selbst had made a “friendly” wager prior to the start of the WSOP. Selbst said she would put up $1.8 million against Mercier’s $10,000 that (180-1 odds) that he wouldn’t win three bracelets this summer.

She was reportedly under the influence when the wager occurred, and later suggested that due to her inebriated state, the bet should be called off. Mercier was having none of it, however, and neither were many poker players on Twitter, who agreed she was committed to pay up if he hit.

In fact, throughout the past week since Jason began his winning streak, some heated debates on social media about whether or not he should let her out of the bet hit the Internet. As it turned out, all that Twitter drama was for nothing.

“I lost almost 100k in buyouts and I still have many of you brilliant Twitter minds saying I welched on a bet. Autoblock mode engaged,” Selbst posted on her Twitter page.

One of her followers made the assumption she bought out after Mercier’s 2nd place finish in the $10,000 Seven Card Razz event, but Selbst wasted no time in correcting that line of thought.

“I bought out long before any of this crap went down. Ppl like drama and they read what they wanted to from the situation,” she responded in defense of her actions.

Not everyone bought this story, but Mercier hasn’t commented publicly on whether or not a buyout was granted. If not, should he win another bracelet this summer, Selbst will owe him $1.8 million. We will keep you posted as we find out more on “As the Poker World Turns.” Stay tuned.

New Yorker Calvin Lee took down Event #21, the $3,000 6-Handed No-Limit Hold’em championship. This was his first career bracelet and just his third cash at the World Series of Poker ever.

Lee earned $531,577 for his efforts. He outlasted a field of 1,029 players over four days. Steven Thompson finished in 2nd place. Will Givens, the chip leader heading into the final day, ultimately busted in 4th.

After Day One of Event #27, the $1,000 Seniors No-Limit Hold’em, Robert Campbell has the chip lead with 675 players left. The event began with 4,499 players. Campbell has never cashed in a WSOP event. Play resumes at 11 am Pacific time today.

Robert Varkonyi, the 2002 Main Event champ, also made it to Day Two. Neil Blumenfield, one of our favorite 2015 November Niners, has an average chip stack heading into the tournament’s second day.

Other notable names remaining in the field include Toto Leonidas and Billy Baxter. This is a three-day event, with a winner expected to emerge on Sunday.

A few championships will finish up today. Event #23, the $2,000 No-Limit Hold’em (which was supposed to complete yesterday) played down to the final two on Friday. Viliyan Petleshkov and Cesar Garcia will battle it out for the bracelet today.

showing that tournament players are good after the controversy that was against a cash game high roller saying players MTTs were very nit, ahroa with the 5 bracelet this great player Jason Mercier is covering mouths and making history in World Series of poker