On Day 15 at the 2016 WSOP, the talk around the Rio in Las Vegas was mostly about Jason Mercier chasing his second bracelet of the summer, and the fifth of his career. But the reason for the chatter had more to do with a little side bet. 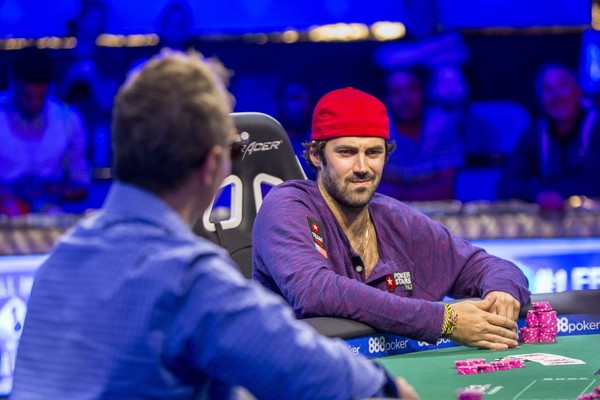 One inebriated evening some months back, fellow PokerStars pro Vanessa Selbst, arguably the best female poker player in the world, made Jason a bet she was now beginning to regret.

The bet was simple. If Mercier won three bracelets at the WSOP this summer, Selbst would owe him $1.8 million. Should he fail to accomplish that goal, he would owe her $10,000. For those math majors out there, you’ve already calculated in your head that that’s 180-1 odds.

After Mercier won his first bracelet early in the month, Selbst began to sweat. When he got heads-up in Event #20, the $10,000 Seven Card Razz on Wednesday, she must have been sweating bullets.

Mercier was locked into an intense heads-up battle with Ray Dehkharghani, but was unable to pick up his second bracelet of the summer. The PokerStars pro began heads-up play with a slight chip advantage, but quickly seized the chip lead.

And then it all came crumbling down. Everything went Dehkharghani’s way.

This isn’t the first time Dehkharghani found himself in a heads-up match with a poker legend. In 1998, he finished second to the great Doyle Brunson in another razz tournament. But this was his first career bracelet. The payment for 1st place was $273,338.

So Selbst can now breathe a sigh of relief, but she hasn’t won the bet just yet, either. There are plenty of opportunities for Mercier to win some more bracelets, but it will be tough to win two more. For Jason, it had to be painful on more levels than one to see that payday slip through his fingers.

How Drunk Is Too Drunk?

The bet itself hasn’t received as much attention around the poker world as Selbst attempting to back out of the wager has. Her argument is that she was so drunk that the bet shouldn’t count.

Mercier, along with many others on Twitter, disagree. The two have gone back and forth on social media the past few days. Some poker players say that “a bet is a bet,” while others disagree.

“Currently offering 179-1 against actual progressive anti-gun legislation resulting from this filibuster,” she posted on Twitter,  in reference to the ongoing and now raging gun control debate in Congress.

That filibuster finally came to an end after a 15-hour run by Democrats in the Senate in the wee hours today when GOP leaders acquiesced to allow voting to proceed on several proposed bills on the topic.

It wasn’t all about the crazy prop bet on Wednesday, though. There were plenty of other exciting events going on as well.

Ryan Laplante, who had taken down Event #12 just last Saturday in the $565 Pot-Limit Omaha championship,  finished 21st in Event #22, $1,500 Limit Hold’em. It was his seventh cash of the summer, which includes that first WSOP gold from last weekend. Mercier and Laplante are in a heated and pretty thrilling battle for WSOP Player of the Year.

Daniel Negreanu already has a 4th place finish at the 2016 World Series of Poker, but would really love to win his seventh bracelet. On Thursday, he’ll have that opportunity.

The Poker Hall of Famer is 5th in chips and will have a good shot at another bracelet. But he’ll have to beat out a stacked field, including Mercier’s arch-enemy, Doug Polk. First place will pay $531,577.

Over in Event #19, the $1,000 Pot-Limit Omaha championship, Sam Soverel of West Palm Beach, Florida took home the gold and the cash. This was his first career bracelet and just his third cash ever at the WSOP. Soverel defeated Kirby Lowery heads-up and won $185,317. The tournament had 1,106 players and completed in three days.