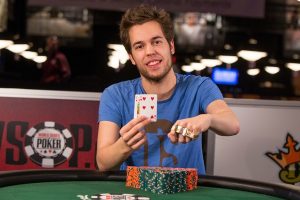 For those unfamiliar with Dominik Nitsche, it’s time to get to know the name and the player. The young German was a force on the live poker tournament circuit long before he was old enough to play in the WSOP. His first year at the Series was in 2012, where he won his first gold in a $1K NLHE tournament. Last year, he cashed in seven WSOP events.

In 2014, he played the WSOP Circuit National Championship and won it in late May before heading to Las Vegas for the WSOP. In less than two weeks, he claimed yet another piece of poker gold. Keep your eyes on this one.

Christopher “Fox” Wallace has been in the poker game for years, but finally emerged this summer with his first WSOP title. Doug Polk is a younger player, but definitely a force in any game, and he also took down his first WSOP yesterday.

With no final tables playing out on June 11, we suggest a day at the pool (or a nap for poker media). It’s a rare light day at the WSOP, so make the most of it.

This was anything but another $1K NLHE to the thousands of players who entered:

Day 2 saw only 168 players return for their chance at gold, and Day 3 brought just 16 players back. David Lucchesi was the first to leave on the final day, and the tenth place bustout of Lance Harris set the final table.

Thayer Rasmussen led the final table but ended up exiting in fifth place. Dominik Nitsche was down nearly three-to-one when the heads-up match started against Dave D’Alesandro, but the young gun pushed through and all the way to the winner’s circle.

The HORSE Championship produced a stacked field that started with these stats:

Day 2 thinned the field from 121 players to 21. Day 3 then sent players like Mark Gregorich, Daniel Negreanu, Bertrand Grospellier, Justin Bonomo, and David Benyamine to the rail.

The ninth place bustout of Bruno Fitoussi set the official final table, and Chris Wallace was one of the shorter stacks. He fought through as Calvin Anderson and Bill Chen exited, and he hung in there as players like Richard Sklar and Randy Ohel soared. Wallace then took a slight chip deficit into heads-up but came back for the win.

This tournament was a turbo, and it proved its name every step of the way. It started with these figures:

And it obviously moved quickly from there, setting the final table by the end of the first day of play.

Day 2 started and ended with Doug Polk holding the most chips. Andy Philachack was second in chips to start the day and did make it to heads-up play against Polk, but the latter continued his dominance all the way to victory.

Six-handed tournaments have become quite popular, and the $5K buy-in is a popular one with players. This year brought in even more players than in 2013 for the same event:

This was certainly no turbo tournament, as there were still 129 players in action when play stopped. The final chip counts were not available, but official reporting named the following five as the chip leaders:

Quite a few players enjoy the Omaha/Stud mix, and this year brought in nearly 100 more players than last year at the $2,500 buy-in level. The final late-night registration numbers were provided as:

Play started at 4pm and went late into the night, reducing the field to 139 players by the end of it. Again, no official chip counts were provided as of 8am, but these five players were listed as notable stacks in preparation for Day 2:

Events 24 and 25 will try to set their final tables.

There are no final tables and will be no 4pm tournament.