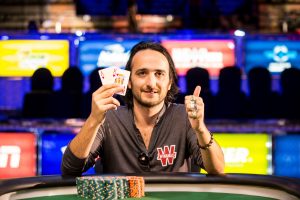 The 13th day of the 2014 World Series of Poker was filled with excitement. One of poker’s Triple Crown winners, Davidi Kitai, won his third WSOP bracelet early in the day. George Danzer won his first, and Dan Heimiller topped the Seniors Championship to take home his second WSOP title.

Meanwhile, one of the celebrity faces at the WSOP, James Woods, was playing yet another tournament when he experienced chest pains. Paramedics responded as he was positioned on the floor, and he felt as if there was a cardiac problem. The ambulance transported him to the hospital, from whence he later tweeted that it was a food poisoning incident that caused the scary symptoms. He was resting in the hospital and thanked everyone for their concern.

For today, keep an eye on the $10K HORSE tournament as it plays toward a final table. With Jeff Madsen leading the field and a number of recognizable faces in solid chip position, it will be the one to watch.

An extra day was added to this $3K NLHE short-handed event, which started like this:

Day 2 reduced the field from 144 players to 15, and Day 3 took it down to heads-up play but only far enough to see Davidi Kitai’s initial lead shrink.

A bonus Day 4 started with Gordon Vayo holding 3.75 million chips to the 3,545,000 of Kitai, but the latter was determined. Aggression and tenacity paid off over the 70-ish hands of play that gave Kitai his third WSOP bracelet.

The Seniors event again set a record for the largest gathering of 50-and-older players:

Day 2 took the field down to 32 players, which made for a daunting task of finishing the tournament on Day 3. Original Day 3 chipleader Kevin Detienne exited in 11th place, and the tenth place exit of Michael Frederick set the final table.

Play moved forward in the late evening hours, and Senior Poker Tour pro Dennis Phillips ended up exiting in fifth place. Heimiller had control of the final table for the majority of play, and he emerged victorious to claim his second WSOP gold bracelet.

The highest buy-in Razz tournament ever required a $10K buy-in and produced these numbers:

Day 2 whittled the field from 76 players to just 12, and that dozen returned on Day 3 to continue to action.

Daniel Negreanu and Dan O’Brien were among the first to exit, and the original day’s chip leader, David Bach was the first to leave the official final table. Ultimately, George Danzer took a slight lead into heads-up play against Brandon Shack-Harris, who was already a 2014 WSOP bracelet winner. The two wrestled for a while, but Danzer controlled most of the play and took that to the winner’s circle for his first WSOP bracelet.

Day 2 brought 233 players back, quickly moved through the money bubble, and reduced the field to just 12 players by the end of the night. The top five of them held these stacks:

The high-priced set of Sit-n-Go tournaments brought these numbers into play for the Shootout:

Day 2 started with the 40 table winners from the first day and round of play. Those 40 players competed in Round 2 on June 8, doing it four-handed on 10 tables. Players like Chris Bell and Phil Galfond won their tables, and the very last one running finally saw Michael Stonehill defeat Daniel Alaei for the last seat.

The final table was then set for June 9 as follows:

The second $1K NLHE event of the Series attracted just a tad fewer players than the previous year’s corresponding tournament:

The first day of play burst through the money bubble late in the day and paid players at least $1,875. Names like Paul Newey, Steve Brecher, Matt Brady, and Theo Tran cashed before play ended with 168 remaining. The top five were:

Last year, there were two HORSE events, but this year, the executives put it on the schedule as a $10K buy-in championship. And the turnout was better than expected:

The late-starting event thinned the field down to just 121 players by the end of the night, and the top five on the leaderboard were:

On Tap for June 9

Events 19 and 20 will play to and through their final tables.

Events 21 and 22 will try to reach their final tables.

Event 23 ($1K NLHE Turbo) begins at noon as the only event to start on Monday.