On Sunday, which was WSOP Day 12, Howard Lederer’s bracelet dream was shattered, likely causing poker fans all over the world to rejoice. Playing in his first World Series event since 2010, The Professor made it to Day Two in Event #16, the $10,000 2-7 Draw Lowball, but was unable to work effectively with a short stack and was sent to the rails by Brian Hastings well before the bubble. 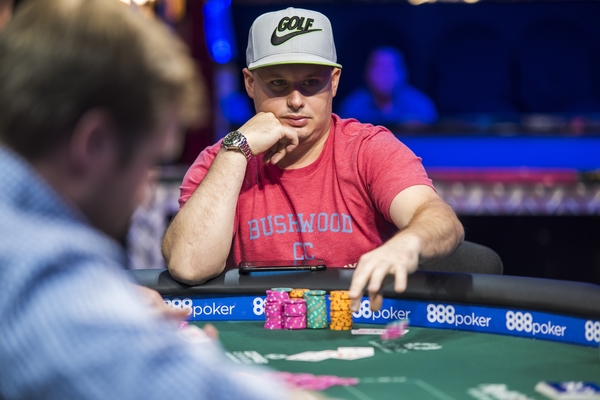 Paul Volpe, seen here playing on Sunday at Event #15, the $1,500 Eight Game Mix, took down the championship and $149,943. It was his second-ever WSOP gold bracelet. (Image: pokerphotoarchive.com)

Lederer’s return to the poker world won’t sit well with many, but neither will some stats we’re about to post. If you are an advocate of attracting more women to the game, you won’t like what you’re about to read.

The Millionaire Maker, an exciting $1,500 tournament that is currently running, had 5,479 players enter at least once. But only 246 of them were women ( that’s just 4.4 percent).

Overall, considering how far we should have come by now in shifting the dynamic a bit, this is a disheartening reality. And sadly, Millionaire Maker isn’t the only event this year to have a relatively low number of female entrants. For example, only 5.9 percent of the entries in the 21,613 field Colossus II were women.

It appears, for no doubt a variety of reasons, that poker continues to attract many, many more men than their counterparts. Women like Vanessa Selbst and Jennifer Harman, just to name two superstars of the game, prove that talented women can clearly hold their own at any level in poker. But we obviously have a long way yet to go in attracting more women with this kind of potential to the felt.

Jason Stockfish eliminated Ron Ware to bring the tournament to its final two players. Stockfish held a slim chip advantage when heads-up play began, but with both players holding less than 30 big blinds, one or two hands would determine the winner. Volpe happened to be on the right side of those confrontations.

Ben Ludlow (4th), Anthony Lazar (5th), and Gavin Smith (6th) also made the final table. There were 491 registered for this event which began on Friday.

Poker pro Alex Jacob didn’t do much losing during his long run as a contestant on Jeopardy last year. He also doesn’t do a lot of losing at the poker table.

Jacob made it through Day Two of the Millionaire Maker with 304,000 chips. That’s good for 77th out of 124 remaining players, who will play down to the final table by end of day today.

Also in the hunt for one of the two million dollar guaranteed paydays for the top two spots is the 2013 Millionaire Maker champion, Benny Chen. He heads into Day Three of four on Monday with 926,000 chips, good for 8th place.

Jacob now has 26 career WSOP cashes, as this tournament is already well beyond the money bubble, but it’s his first since 2012. Once one of the top players in the game, the Jeopardy star has removed himself from poker over the past few years.

Loni Harwood, who won a Circuit event bracelet last summer in the $10K No-Limit Hold’em at Harrah’s Cherokee in North Carolina, made it through two days of play with 417,000 chips.

Mohsin Charania from Chicago starts play today as chip leader with 1,664,00 in his stacks. Quietly, Charania has cashed 32 times in WSOP events, but has never won a bracelet. Will be interesting to see if he can make it deeper in this key event.

Pros Saddle Up for H.O.R.S.E. Action

Mixed games are some of the most exciting tournaments at the World Series, because a large portion of the field is usually composed of big name pros. Event #18, the $3,000 H.O.R.S.E., has proved that fact once again. 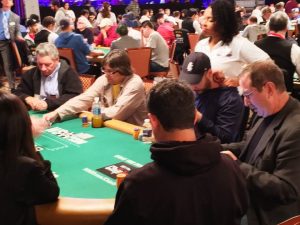 Among the notables at the felt on June 12 in Event #18, the $3,000 H.O.R.S.E championship, were WPT host and recent author Mike Sexton (left) and ESPN WSOP commentator Norman Chad (far right). (Image: CardsChat.com exclusive)

Of the 400 players registered on Day One, Sunday, many familiar faces competed. At one table, legendary poker television broadcasters Norman Chad (ESPN) and Mike Sexton (Fox Sports) were seated. Both busted on Sunday, but Chad was able to outlast his fellow announcer.

There are 144 players coming back on Monday for Day Two of this three-day event. A gold bracelet and $259,730 is on the line.