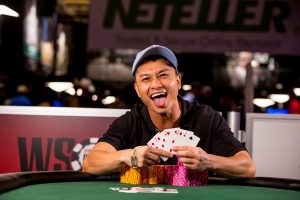 Phil Hellmuth made a second deep run on June 7 at the World Series of Poker, but he was again denied his record 14th gold bracelet. The frustration was returning to the “brat” who claimed he had matured and calmed down prior to this 2014 WSOP.

Before he departed in eighth place in Event 15, he bemoaned the luck of the “crazy Frenchman,” better known to most as Belgium’s Davidi Kitai, winner of the Triple Crown in poker (World Poker Tour, European Poker Tour, and World Series of Poker).

Kitai is still heads-up for the bracelet with Gordon Vayo, as Event 15 moves into its fourth day. Meanwhile, Todd Bui claimed a bracelet in Event 16.

Event 18 is the one to watch on June 8, as some very well-known players vie for the Razz championship title. David Bach leads, Daniel Negreanu is the main attraction, and Brandon Shack-Harris goes for his second bracelet in less than two weeks.

Phil Hellmuth may have been one of the main stories of this No Limit Hold’em tournament, but these were the starting numbers:

Day 2 thinned the field from 144 players to only 15, and Hellmuth was in sixth chip position at the end of it.

Day 3 started with the elimination of Alen Billic and moved forward as Hellmuth lost ground. Davidi Kitai and Tony Ruberto soared, while Hellmuth verbally sparred with Kitai and others. Hellmuth then exited in eighth place for $45,022, very unhappy about it.

The seventh place exit of Heinz Kamutzki set the official final table of six with Kitai leading and Gordon Vayo taking over second place. Ruberto ended up taking third place, and Kitai took 5.84 million chips into the heads-up battle against the 1.45 million of Vayo. But the latter evened the counts before play stopped for the night with these stacks in play:

The payouts at the final table thus far were:

The only tournament to finish on June 7 began with these numbers:

Day 2 reduced the field from 54 players to eight.

Day 3 started with the eliminations of Ismael Bojang and Kevin Iacofano, each collecting $11,698 on their way out the door.

The final table then began with David Bell in the lead, Tom Franklin close behind, and Todd Bui in third. The shorter stacks exited as Bui climbed, and Bell eventually took third. Bui took a substantial chip lead into heads-up play against Franklin and quickly disposed of him to win.

One of the most anticipated and well-attended tournaments of the year started with these stats:

Day 2 started with just 486 survivors and quickly burst through the money bubble to guarantee most of the players at least $1,752 in cash. The cashier cage was abuzz for the rest of the day, as players like Sammy Farha, Dan Goldman, Shirley Williams, Barbara Enright, and Marcie Topp departed. Play eventually stopped with 32 still in contention for the bracelet and names like Dan Heimiller and Dennis Phillips holding big stacks. The top five were:

The highest buy-in ever for a Razz tournament offered a championship bracelet and started with these registration numbers:

Day 2 brought 76 players back into action and didn’t burst the money bubble until very late in the day. Jesse Martin bubbled, and Scott Clements was the first to cash for $18,592. Nick Schulman followed, as did Hoyt Corkins, and Paul Volpe. Only 12 were still left to bag chips when play stopped, and the top five were listed as:

The first $1,500 NLHE event of this series was the Millionaire Maker, and while this one didn’t offer such a massive guarantee, the players still came out in droves for it:

The first day of play reduced the field to just 233 players, a few short of the money. The top five contenders at that point were:

Shootouts are always popular with players who love Sit-n-Go tournaments. This one had a solid turnout for a $3K buy-in but with notably lower numbers than the previous year’s event:

Only 40 players made it through Round 1, but they were all guaranteed at least $7,805 for doing so. They will all return to the Rio on June 8 to play ten tables of four-handed action, of which the winners will head to the final table.

On Tap for June 8

Event 15 will play heads-up for the title.

Event 17 will try to set its final table but will likely run into an unscheduled fourth day.

Event 18 will play for the win.

Events 19 and 20 will head towards their final tables.