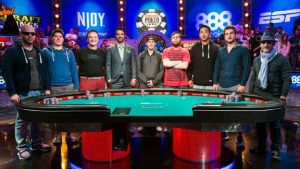 The latest WSOP Main Event betting odds have Joe McKeehen tipped as the favorite for the title. (Joe Giron/WSOP)

The World Series of Poker (WSOP) Main Event champion will soon be crowned and, ahead of the final table, the world’s bookmakers are setting their betting lines.

As in previous years, a mixture of US and European operators are offering punters the chance to speculate on the final nine and earn a return on their investment if the right man wins the event.

Across the Atlantic from the Rio in Las Vegas, Ireland’s Paddy Power is currently running a book for the outright winner of the Main Event.

Largely following the chip counts, Paddy Power is tipping the current chip leader, Joe McKeehen, for the title and offering a price of 5/4 (+125) ; which means a successful $100 bet will earn a $225 ($125 profit) return.

One anomaly in the betting at Paddy Power is the odds given for Max Steinberg. Although he’s now something of a Daily Fantasy Sports pro, Steinberg currently has almost $3 million in live tournament earnings and is one of the most experienced players in the finale.

These facts, on top of his 20 million chip stack, are enough to make him the fourth favorite at 13/2 (+650) ahead of the more chipped up Pierre Neuville according to Paddy Power.

In addition to Paddy Power offering bets on the 2015 WSOP Main Event final table, American sportsbook Bovada is giving customers the chance to speculate on the nationality of the eventual winner.

With six of the nine finalists hailing from the US, Bovada is currently offering 1/3 that the next WSOP World Champion will be an American.

For Something a Little Different

For those confident that someone outside of the US can follow in the footsteps of previous non-American champions such as Peter Eastgate, Bovada will lay you 2/1 (+200) that any other nation will lift the winner’s trophy.

For something a little different, it’s also possible to wager on the color and the suit of the final card of this year’s WSOP Main Event.

The final table of this year’s WSOP Main Event is set to get underway on Sunday, November 8, at 5:00pm local time.

The action will be aired on ESPN with a 30-minute delay before the action is eventually brought to a close on Tuesday, November 10, when the next World Champion will be handed $7.6 million and a shiny WSOP bracelet.