WSOP APAC 2014 Winds Down in Melbourne 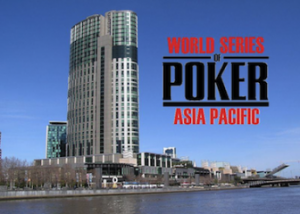 The 2014 World Series of Poker Asia-Pacific tournament series (WSOP APAC) is drawing to a close at Melbourne Australia’s Crown Casino, the home of Aussie Millions, with ten events making for an action-packed double up over the number of tournaments in last year’s inaugural series.

And while US poker pros like Phil Ivey and 2013 Player of the Year Daniel Negreanu dominated the series last year, with Aaron Lim the standout Australian, the current season’s list of APAC champions demonstrates that Aussie poker players came prepared to “play some cards” and defend the home felt at Crown Casino.

With only the $25k High Roller and $10k Main Event left to go in the APAC series, Aussie poker players have largely crushed the dreams of international hopefuls by taking down six of the eight gold bracelets awarded thus far, along with most of the top prize money.

Leading off the Aussie assault, Queensland’s Luke Brabin took gold and $131,365 in the $1,100 NLHE Accumulator event, arriving as the chip leader on day two before amassing a better than 7:1 chip lead going into heads up play against challenger Didier Guerin.

In a crucial hand against 3rd place finisher Daniel Murphy, Brabin got it all in holding Th 9h on a board of Tc 7d 6d Ts, and held to the river against Murphy’s suited Doyle Brunson (Td 2d) to take a commanding lead. Although the short-stacked Guerin fought well heads up, he ultimately fell in 2nd place holding 9d 8d versus Brabin’s Ks Qc.

The $2200 NLHE event was next and found a winner in Junzhong Loo of Malaysia, before Australian players Jeff Lisandro and Scott Calcagno hit home runs by winning the $1,650 PLO and $1,650 NLHE Terminator respectively.

Higgs In the House

To seal the deal over fifty hands later, Higgs rivered a queen-high straight for the win against three-time WSOP runner-up Michael Watson from Canada, who held a pair of kings and a busted straight draw.

All in all, it has apparently been another exciting WSOP series in the land Down Under, with Australian poker players setting a high bar for future APAC contenders. Stay tuned for the results of the WSOP APAC High Roller and Main Event.