The World Series of Poker (WSOP) 2017 is a little over four months away, but poker players can now officially start planning for the summer. Seth Palansky, Vice President of Corporate Communications for Caesars Entertainment, has announced the full schedule via press release for the 48th annual series of tournaments. 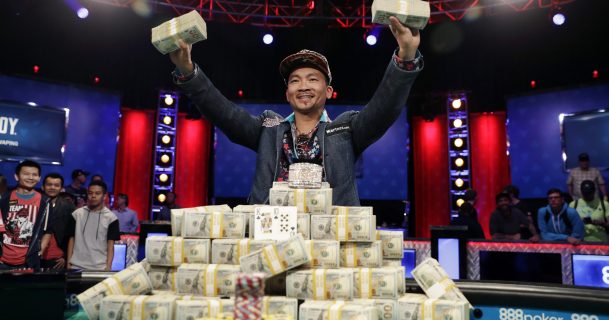 The series begins May 30 and runs until the Main Event plays down to its final table on July 17. During that period, cash games, tournaments, and satellites will be running 24 hours a day, seven days a week at the Rio All-Suites Hotel and Casino in Las Vegas.

As is the case every year, there are new events on the schedule, and all the most popular tournaments are back as well. Tournament buy-ins range from $333 (for the third running of the online bracelet event) to $111,111 (for the High Roller for One Drop). There will be 74 bracelet events in total, the most ever offered in WSOP history.

There are going to be eight new tournaments at the 2017 WSOP. That includes two new online events, in addition to the existing one. They are as follows:

Many of last year’s top events are coming back in 2017. That includes the third edition of the $565 Colossus (Day One is June 2, 3, and 4). This year’s tournament has a guaranteed $8 million prize pool. There were more than 43,000 entries in the Colossus the past two years combined.

Considered by many as the top high roller tournament of the year, the $50,000 Players Championship begins July 2. This five-day event is a mixed-game event.

And, of course, the World Series of Poker’s most prestigious tournament, the $10,000 Main Event, is on the schedule. 2016 winner Qui Nguyen will have an opportunity to defend his world title starting on July 8.

this is awesome. Probably lose all my money but the wife and I are going this year.!!!!!!