On WSOP 2016 Day 44, Joe McKeehen was dealt a pocket pair of irony, the bubble burst in the Main Event, and some big name pros moved on in Event #69, the Little One for One Drop.

McKeehen, the 2015 Main Event champ, of course, has spent the past few months complaining about World Series of Poker tournaments switching from noon start times to 11 am. According to the champ, 11 is just too early for poker players. 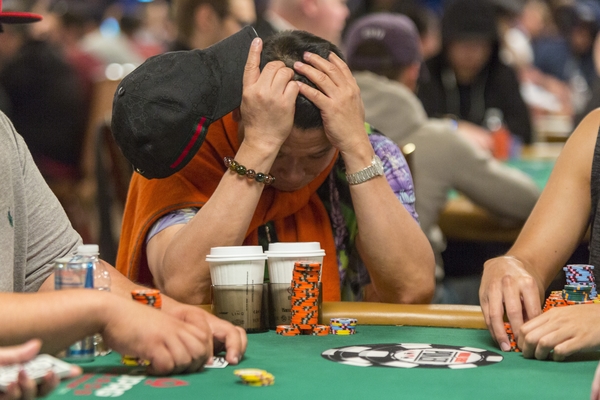 The stress of playing the biggest poker tournament in the world can get to even the great Johnny Chan, apparently. The two-time Main Event champion will return to play again for Day Four on Friday. (Image: pokerphotoarchive.com)

He finally got his wish. Prior to the start of Day Three in the 2016 Main Event, Series’ suits announced the remaining days would begin at noon. McKeehen wasn’t so thrilled when, on the first day the tournament restarted at noon, he busted. Alanis Morissette might be asking, isn’t it ironic?

McKeehen busted shortly before the bubble burst on Thursday. This year’s bubble boy, Adam Furgatch, was a good sport when he became the last player to hit the rail without cashing.

WSOP Tournament Director Jack Effel came over to his table to introduce him to the crowd. The remaining players began to cheer, and Furgatch was a good sport. For being the 1,012th place finisher, he received a free entry into the 2017 Main Event. He doesn’t get any cash, but it sure beats busting in 1,013th place.

By the end of the night, there were 800 players left in the field. Belgium’s Kenny Hallaert will have the biggest chip stack (1,709,000) when play resumes on Friday at noon PT. There are 40 players with at least 1 million chips.

Down to Four Previous Champs

There are just four remaining Main Event champs left in the field, including the legendary Johnny Chan. Chan, the 1987 and 1988 winner, went home on Thursday night having bagged and tagged 588,000 chips, which is above average. 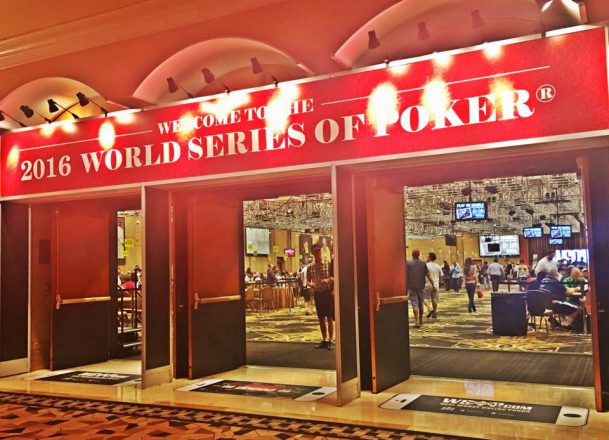 And then there were two: only the Main Event (Day Four) and the Little One for One Drop (Event #69, Day Two) remain to be played out at the 2016 World Series of Poker at the Rio in Las Vegas. (Image: CardsChat.com exclusive)

But no defending champ has more chips than Greg Raymer. The 2004 champ had a stellar day, exiting the Rio with 732,000. Ryan Riess and Tom McEvoy are also still in the field with below average chip stacks.

Many big name pros, such as Phil Hellmuth, Michael Mizrachi, Daniel Negreanu, and Erik Seidel, were unable to make it through to Day Four. But a plethora of top players you’re probably familiar with are still alive and kicking.

Antonio Esfandiari is not only just moving on: The Magician has a huge stack (1,381,000). He’ll have a large rail cheering him on Friday.

While there may be fewer household name left in the field at this point than in most previous years, there are still plenty of familiar faces to watch. That includes Steve O’Dwyer, Tom Marchese, Kenny Tran, Todd Brunson, Jason Somerville, Andrew “Lucky Chewy” Lichtenberger, and 2015 WSOP Player of the Year, Mike Gorodinsky.

Women of the Year

There are also plenty of talented ladies still chasing the coveted Main Event bracelet, three days into the tournament.

One woman who many might have expected to be dominating, Vanessa Selbst, was sent to the rail on Thursday, alas.

Not So Little One for One Drop

There were 4,360 players registered for Event #69, the $1,111 Little One for One Drop, over three Day One starting flights. Day One concluded on Thursday with 836 players remaining, yours truly included.

Day Two begins on Friday at 2 pm Pacific, and quite a few poker stars will be coming back. Many players registered for this tournament after busting out of the Main Event.

Jason Mercier is down to his last opportunity to win his third bracelet of the summer. He’ll enter Day Two with 30,500 chips, which is slightly below average. Chris “Jesus” Ferguson also has some work to do, as he will come back with 40,800 chips.