All eyes will be on Scott Seiver today, but yesterday was Travis Baker’s day, as the man who just barely made the minimum age requirement of 50 in the Seniors event blitzed through the final table to finish off a dream performance. But we’ll start with the Poker Players Championship, where Seiver has grabbed the chip lead after each of the first two days. 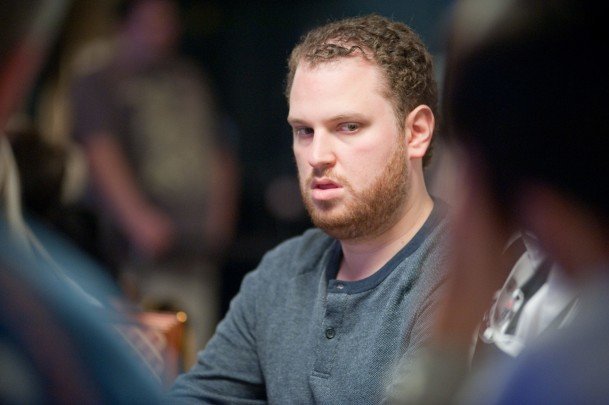 Scott Seiver once again holds the lead going into Day 3 in the Poker Players Championship, holding on to his top spot as play kicks off. (Image: bluff.com)

When the dust settled and late registration ended, the Poker Players Championship ended up attracting 84 entries, which was 18 less than last year, but a bit more than the dire predictions made by some after the addition of Badugi and No Limit Deuce-to-Seven to the tournament’s game mix this year. That was enough to produce a prize pool of $3.7 million, with $1,270,086 going to the winner.

After two days of play, 47 players are still alive, and they are once again led by Scott Seiver. After grabbing the chip lead on the opening day of play, Seiver held that position at the end of Day 2, more than doubling his chip stack to hold off a group of players that are now close behind him.

Abe Mosseri, Matthew Ashton, and Dee Tiller are all very close to Seiver, with Mike Gorodinsky rounding out the top five. If you’re looking for some potential stories a little further down the chip standings, Michael Mizrachi is in 11th place, putting him in the hunt to put his name on the Chip Reese Trophy for a third time, while nobody else has won the title more than once since it was established in 2006.

Poker has been dominated by the young over the past decade, but there are still places in the poker world where age has its benefits. One of those is the highly revered $1,000 Seniors Championship, which caters exclusively to players 50 and over who want to pursue WSOP glory.

This year, the Seniors Championship attracted well over 4,000 players, and like every big field tournament, it opened up the possibility for amateurs to have a couple of great days and work their way to the top of the heap. That’s exactly what happened to Travis Baker, a 50-year-old construction manager from Tulsa who scored his first WSOP cash by winning the event.

Baker took home $613,466 for his big win, and of course collected his first World Series gold bracelet. But while he may not have been a known quantity going into the tournament, his win wasn’t nearly as surprising as the ease with which he finished things off in the late stages.

Once the tournament was down to five players on Monday, Baker took just 35 minutes to eliminate the other four remaining players. In heads-up play, he defeated Carl Torelli (who finished 14th in this same event last year) in about ten minutes.

“I always felt comfortable while playing,” Baker told WSOP.com. “I never got nervous or anything. It was partly because everything went my way.”

The most surprising part of Monday’s play in this tournament may have been the loss of some notable players who had very healthy stacks, including Antonio Esfandiari and Jonathan Little. Still in the field is Yevgeniy Timoshenko, who will enter Day 4 with one of the shortest remaining stacks.

Day 2 of the Super Seniors event played down to a similar point, with 25 players coming back on Tuesday to fight for a bracelet. Leading the way is Wayne Knyal, who will be looking to do the same thing Baker accomplished in the Seniors event, namely make his very first WSOP cash a bracelet-winning performance.

In the $1,500 No Limit Hold’em tournament that began on Monday, 260 players survived Day 1 out of a starting field of 1,655. Brayden Fritzshall has grabbed the end-of-day chip lead, while Eric Baldwin, Loni Harwood, Ari Engel, and Carlos Mortensen all have plenty of chips to work with heading into Day 2.

The $3,000 Six-Handed Pot Limit Omaha tournament drew a big crowd for a non-Hold’em event, with 682 players coming out to try their luck at four-card poker. Russia’s Arseniy Makhaev grabbed the Day 1 chip lead, with Erick Lindgren, Joe Ebanks, and Martin Finger among those on the leaderboard at this early stage.

Two tournaments have a chance to finish up on Tuesday, but there are no guarantees in either of them. The Extended Play and Super Seniors events are both scheduled to end today, but each still has some way to go before they get to their respective final tables. And the structure in the Extended Play tournament makes it even more likely to stretch into Wednesday.

The schedule also has two new events starting on Tuesday. At noon Pacific Time, there’s a $2,500 No Limit Hold’em tournament. There’s not much to say about this one other than that as yet another No Limit Hold’em event, it should draw well and build a big prize pool.

At 4 pm PT, the $1,500 Seven Card Stud tournament will kick off. After Hold’em and Omaha, Seven Card Stud is probably still the third-biggest draw in the poker world, so expect a reasonable number of players to take a shot in this one, given the low buy-in.