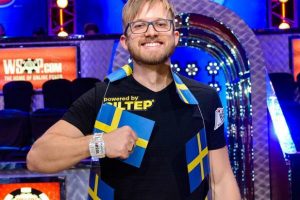 Martin Jacobson of Sweden won $10 million in the 2014 WSOP Main Event, and the 2015 winner will enjoy the same guaranteed prize. (Image: WSOP.com)

The World Series of Poker (WSOP) is the most anticipated poker tournament series of the year, and players can now start making their plans to visit the Rio in Las Vegas this summer.

The WSOP officially announced the basic outline of its 2015 schedule last week, and while the final details won’t be available until later in January, there’s already enough information to get a fairly good sense of what the series will look like this year.

The 2015 WSOP will begin on May 27, and will proceed nonstop for 49 days, only breaking on July 14 after the Main Event final table has been reached. While the complete schedule has yet to be determined, organizers say that the series will likely feature 60 or more bracelet events covering a wide variety of poker formats.

“We believe the WSOP is uniquely able to deliver the big event with life-changing money for some and a life-experience for all,” said WSOP Executive Director Ty Stewart. “We are going to proudly stage the kinds of events which draw players from all around the world while also staying true to our heritage of contesting all variants of poker.”

As usual, the series will culminate with the Main Event, which will begin with three starting flights on July 5 through July 7. The $10,000 buy-in tournament will once again feature a $10 million guaranteed prize for the winner, a decision that proved somewhat controversial among poker players on Twitter.

While WSOP Tournament Director Jack Effel defended the prize guarantee as a key way to attract players, many others chimed in to say they thought it would hurt the game.

“By concentrating winners you’re reducing field sizes for your own tourneys for each following year as bankrolls concentrate [at the] top,” wrote poker player Oliver Gill, echoing the sentiments of many players. Gill was among several people suggesting a $1 million guarantee for all nine final table members as an alternative.

“I don’t think any of us are wrong here, but there has to be balance and solution needs to be what’s best for long term success of the event,” Effel wrote, responding to many critics. That prompted another response from poker pro Gavin Smith.

“Since all I have read is you and [Ty Stewart] debate your side, and many others our side, I think we actually can agree who is wrong,” Smith wrote.

The response was more overwhelmingly positive for a series of tournaments designed to attract more mid-stakes players to the WSOP. The Millionaire Maker and the Monster Stack tournament will both be back for 2015; each features a buy-in of $1,500, and each generated a prize pool in excess of $10 million last year.

They’ll be joined by the Colossus, a $565 buy-in tournament that will have four starting flights, reentries, and a $5 million guaranteed prize pool.

“Load up the entire gang,” Stewart said in a statement. “The Colossus is going to feature a historic prize pool at this buy-in level and it can only happen at the World Series of Poker.”

Also returning to the WSOP will be two events benefitting the One Drop Foundation, which helps bring water sources to Third World countries: the $111,111 buy-in One Drop High Roller, and a $1,000 “Little One for One Drop,” which features a $111 add-on and unlimited re-entries.