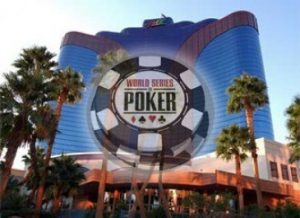 WSOP 2015 is ushering in many changes to the event, in hopes of pulling in more amateurs and boosting numbers. (Image: pokerupdate.com)

WSOP 2015 may be less than four months away, but it’s light years from where it used to be, metaphorically speaking.

Hoping to attract fresh blood and more amateur poker players, the event series has announced quite a few changes in events and structures, as well as a new way of delivering live reporting throughout.

The 2015 World Series of Poker (WSOP) will officially put cards in the air come May 27th at the Rio All-Suite Hotel and Casino in Las Vegas, and will feature a variety of buy-ins, increased starting stacks, and nearly a dozen new events.

The 46th running of the series will include a record 68 bracelets, including the first-ever online bracelet.

The $1,000 buy-in will run on WSOP.com and conclude with a two-player finale at the Rio on July 3. The $10,000 NLHE Main Event gets underway on Sunday, July 5, with a guaranteed minimum payout to 1,000 players for the first time ever.

Last year, the WSOP attracted 82,360 entrants from 110 countries, and organizers seem focused on growing the tournament in terms of total players instead of enormous cashes. This year, with buy-ins at their lowest since 1980 and a bracelet contested almost entirely online, the 2015 series might surpass 100,000 total players.

WSOP Executive Director Ty Stewart says of the schedule, “If you’ve never thought about coming to Las Vegas for the WSOP, this is the year. Now more than ever, the WSOP has something for everyone and with this schedule we believe the value and opportunity for player success exists in each and every event we are offering in 2015.”

With a total prize pool exceeding $200 million, the World Series of Poker will once again be the most attended live tournament of the year. It’s also trying to lure a new crop of casual players to the WSOP tables through several new methods, such as:

The $565 Colossus No-Limit Hold’em is the most anticipated new event due to its guaranteed $5 million prize pool. The smallest WSOP buy-in since 1980 will take place during the May 29th opening weekend and is expected to draw over 10,000 entrants. If it does, it will become the largest live tournament field in the history of the game (2006 WSOP Main Event currently owns that title with 8,773 entries).

Continuing with the overall WSOP strategy, the $10,000 No-Limit Hold’em Championship is appealing to a larger pool by guaranteeing 1,000 finishers will cash contingent on 5,000 entries.

While more cashes means a slightly reduced pot for the overall champion, the WSOP says all players at the November Nine will win no less than $1 million if entries reach last year’s total of 6,683. That’s particularly good news for Mark Newhouse who exited in 9th the last two years with cashes of $733,224 and $730,725, if he can pull off a third Final Table performance (you know the odds-makers are on that one).

Paired with the increase in starting stacks, Main Event cash guarantee, and pushing starting dates back to include Fridays, it’s easy to see that tournament directors are appealing to amateurs over pros.

By and large, professional players have dominated the big tables the last several years, and that has likely hurt the overall health of poker from its Moneymaker heights.

WSOP recently ended its agreement with PokerNews for live coverage after the two couldn’t agree on terms. In years past, PokerNews split traffic from its website with the WSOP, but dwindling interest in the tournament has led to decreased revenue.

PokerNews announced that it can no longer afford to supply coverage due to a lack of third-party sponsorship. In fact, the changing shape of the online poker landscape has made it “unsustainable,” the agency said.

The WSOP has always charged outlets for the privilege of being its official news agency with exclusive rights to provide live updates. Originally, the coverage was sponsored by PokerStars, which it made affordable for PokerNews.

PokerStars has always been interested in aligning its brand with that of the WSOP; Moneymaker’s victory at the 2003 Main Event after satelliting via a PokerStars feeder helped to kick-start the poker boom, after all, and for a long time the “WSOP dream” remained integral to PokerStar’s marketing vision.

However, it could only go so far. When Caesars Interactive launched WSOP.com as an online poker site, PokerStars pulled the plug. After all, why should it dip into its marketing budget to help provide publicity for a competitor?

“The truth is that WSOP has moved in to competition against traditional brand advertisers,” said Jonathan Squires, CEO of iBus Media, which owns PokerNews, in an interview with Pokerfuse. “Two years ago we lost PokerStars as a main sponsor and we have been making a significant loss each year since,” he added.

The overall WSOP changes are certainly exciting to poker fanatics, but will it entice casual players to travel to Vegas and place their bets? We’ll find out in late May.

Yes, definitely. As an amateur I would much rather got to the WSOP and spread $10,000 across a few different events than put it all on the main event. These new additions are very attractive and it may be the reason I finally make the long trip to the WSOP this year.

much agreed. id love to have that oppurtunity…