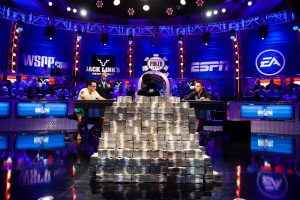 888poker will be an official satellite provider for direct seats to WSOP 2015 events. (Image: WSOP.com)

WSOP 2015 has entered into an exclusive branding deal with online operator 888poker. The new deal will see the Internet site’s logo given exposure during the summer series, both inside the Rio and on ESPN broadcasts of the event.

Additionally, 888poker will become the only platform officially allowed to offer World Series of Poker and WSOPE qualifiers outside of selected territories (the US, British Columbia, Quebec, Canada, Mexico, India, Italy, and France).

Described in a recent press release as a “board sponsorship and content pact,” the agreement will give players access to host direct satellites for WSOP 2015 events, including the $10,000 Main Event and the inaugural WSOP bracelet event.

For players, the new deal will not only give them a clear path to the largest tournament festival in the industry, but the peace of mind that comes with being able to register online.

Unlike other online poker operators that offer trips to Las Vegas with the promise of cash for tournament buy-ins, 888poker will automatically register players for a WSOP event. That means they won’t need to worry about collecting cash, queuing up to register, and potentially having to wait on the rail as an alternate if an MTT is overcrowded.

The relationship between 888poker and the WSOP is one that’s become well-established over the last few years. 888poker provides the software for Caesars Interactive Entertainment Inc.’s online platforms in New Jersey, Nevada, Delaware, and the UK.

Moreover, New Jersey’s 888poker and WSOP.com recently agreed to share player pools at low stakes, which is a move that’s not only strengthened the relationship between the two brands, but improved the overall liquidity of both sites.

“As a true partner with the WSOP on the B2B side where we power their real-money gaming in the United States, this was a logical next step for us to carry the power of the WSOP to our players across all other major markets we serve. This broad package gives 888poker players a great opportunity to win their way to WSOP events on our online poker site, plus gives us terrific content and assets to market our brand,” said Senior Vice President & Head of B2C at 888 Holdings Itai Pazner.

WSOP.com for US Players

Although 888poker will become the “official” home for satellites in the majority of European countries, players in the US will have to log into WSOP.com for a chance to ante-up in Las Vegas. All players aged 21+ living in New Jersey and Nevada can play for a cheap seat in the Series via their computers or mobile devices.

Overall, this symbiotic relationship between the two companies should help raise the profile of this summer’s festival and push numbers up in all the events. According to the WSOP’s Executive Director Ty Stewart, the new partnership will create more opportunities for players ahead of this year’s Series.

“We see 888poker’s expanded sponsorship as an important step to qualify players affordably and bring additional prize money to the tournaments,” said Stewart.

I was playing on 888 earlier this evening and a host informed me via live chat that I can play satellites on 888 to the WSOP. I had no idea until she informed me. Then I saw this article so I think the poker gods are telling me something. This is great news. I wouldn’t pay full price to play the main event but if I could win a seat online I would definitely go, and play a few of the smaller events also.