Not at WSOP 2014: Viktor Blom Among Big Winners 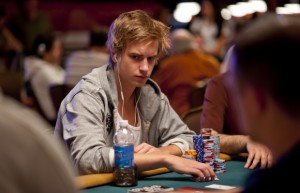 When the World Series of Poker is in Las Vegas, poker players from around the world travel to Nevada to participate. Without access to global online poker sites from the US, companies like PokerStars and Full Tilt Poker see a decline in tournament registration numbers and cash game players during that time.

This year, various World Cup matches got in the way of online poker traffic as well, making for a tough summer for many non-US poker sites.

Meanwhile, there were some of the world’s best and highest stakes players who preferred to stay home and skip the trip to the desert in order to focus on the Internet poker tables. Viktor Blom was among them and made a nice profit by simply staying home.

Players like Viktor Blom, who plays online as Isildur1, is known for shying away from the spotlight. He is uninterested in doing interviews (on or off camera) and isn’t one for the party scene. Of the little known about the high-stakes online poker player, he simply prefers online poker from the comfort of home.

This summer, he followed his instincts, stayed home from the WSOP, and won about $500K online. The only player to make more at the high-stakes tables throughout the summer was a player by the screen name of punting-peddler, who won over $550K. As for Blom, he is still down more than $1 million for the 2014 year thus far, but he has known bigger swings than that during his years as a full-time player.

Ben Sulsky, who plays under the online poker name of Sauce1234, took the summer off from the WSOP and chose online poker as well. He finished the WSOP time period up approximately $260K.

Almost as soon as the WSOP began in Las Vegas at the end of May, the major online poker tournaments saw a decrease in players, especially in their biggest games. The players waiting for high-stakes games were scarce, and the action slowed further as the month of June wore on. By the beginning of July, the games were worse off than their normal seasonal lows, as even more players headed to the World Series of Poker to be there in time for the Main Event.

The World Cup also dipped into online poker’s numbers this summer. Game days took many poker players away from the tables to focus on the football games, especially when their country was involved. The final match of the World Cup was especially brutal to online poker sites, as it was scheduled on a Sunday. Many of the biggest weekly tournaments saw registration numbers dip by 40 percent of 50 percent, which sites anticipated by lowering some guarantees. Sites like Full Tilt Poker cut them virtually in half for the final World Cup Sunday.

With the summer almost over and some holidays coming to an end, online poker sites will likely see numbers rise fairly consistently toward the fall months. And for players like Blom and Sulsky, the high-stakes cash games will be juicier as well.