The 2016 WPT Tournament of Champions will feature more than just the season’s winners competing for WPT supremacy. Formerly the WPT World Championship, this year’s season-ending event has a ton of money at stake (without risk for some), some cool gifts, and a little something that will make the anti-tanking crowd happy. 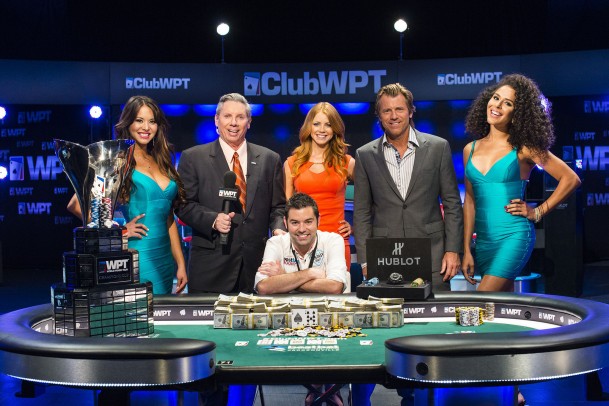 Tyler Patterson, one of this year’s Season XIV winners, will compete in the WPT Tournament of Champions in Hollywood, Florida April 21-23.   (Image: WPT)

The 14th season of the World Poker Tour will culminate with a Tournament of Champions event which is invite-only. To receive an invite, a player must win a Season XIV WPT event at one of the 19 Main Events hosted around the world during the 2015-2016 season, or be an existing member of the WPT Champions Club.

Those 19 Season XIV winners will receive a free $15,000 buy-in to the Tournament of Champions which takes place April 21, at the Seminole Hard Rock Hotel and Casino in Hollywood, Florida. The tournament will conclude on April 23, following three long days of play.

The WPT doesn’t take a rake for this tournament and will add $100,000 to the prize pool. The winner, on top of big bucks, will receive some pretty sweet gifts, such as a pair of 24K gold Monster headphones, a Hublot watch, and a seat in a Tiger Woods’ charity poker tournament.

Best Prize of Them All?

As great as all of that sounds, the most wonderful addition of all may not even be a tangible item, but a gift of time saved. Tanking has been a hotly debated topic in recent years. The WPT Tournament of Champions will attempt to eliminate contentious issue this time around.

There will be a 30-second shot clock implemented. Players will be required to act within that half-minute timeframe or risk being forced to muck their hand. Each player will receive five time extensions, allowing them to double the allotted time when difficult decisions arise.

At the final table, players will re-start with four time extensions. The purpose of the shot clock is to speed the game up. Many poker players have begged and pleaded tournament directors, such as the WPT’s Matt Savage, to implement a shot clock.

Only one WPT event is left on the 2015-2016 schedule before the Tournament of Champions. That event, the Seminole Hard Rock Poker Showdown, will take place in Hollywood, Florida from April 14-20.

The Tournament of Champions will start immediately after at the same location. Each WPT Main Event champ throughout the season receives a free buy-in and airfare and hotel accommodations covered. Those champions are as follows:

The WPT TOC will be televised on Fox Sports, hosted by legendary broadcasters Mike Sexton and Vince Van Patten.