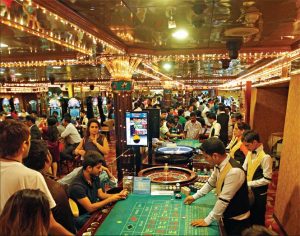 One of Goa’s floating casinos. Could it be a stop on the WPT in the near future? (Image: hindustantime.com)

The World Poker Tour has inked a licensing deal with India’s biggest online poker site, Adda52.com, which will give the online poker room rights to distribute select seasons of the WPT TV show, as well as create its own WPT merchandise, and leverage the WPT brand to attract local sponsorship partners.

Under the terms of the deal, Adda52.com will also be permitted to qualify players from India to WPT events across the world.

The WPT was recently acquired from bwin.party by Hong Kong-listed OurGame Holdings, a company that specializes in multi-platform card-based social gaming mainly for the Chinese market. OurGame announced its intent to expand the WPT across new regions when it acquired the tour last June as part of its vision to build a “global social gaming brand,” and the new deal will certainly allow it to gain a foothold in one of poker’s fastest growing markets.

Poker has been on the up in India, and with a population of 1.25 billion people, of which an estimated 500,000 play online for real money, it’s easy to see why operators are eager to get involved. Adda52.com alone claims to have some 800,000 registered users.

“The association with the World Poker Tour comes at a very crucial time in India,” said Anuj Gupta, founder, and CEO of Adda52.com. “There is a poker boom and the Indian poker community is looking for a better tournament experience.

“With this tie-up, we want the poker community to be exposed to international standards of poker with better structures, well-defined tournaments, and the knowledge the WPT brings to the table.”

The appetite for the game is growing, but the personal computer and smartphone penetration is still very low when compared to other BRIC countries, at around 10 percent of the population. But that’s still around 120 million people, a vast potential market, and that adoption rate can only grow over the next decade.

Would a WPT Goa be a Goer?

The WPT presser makes no announcement of the addition of an India stop on the WPT schedule, although such an event would seem to be inevitable in the near future. If this were to occur, it would likely be in Goa, currently, the hub of the country’s fledgling live tournament scene and home to the of the country’s 12 casinos.

Gambling is very restricted in India and the legality of online gambling is about as gray as it gets, although gambling laws differ from state to state. Land-based casino gambling currently is legal in just three, Goa, Daman and Sikkim.

There’s a sense, however, that poker is viewed differently from other gambling games, thanks to the one of India’s favorite pastimes, rummy, which means that Indians can easily wrap their heads around the concept of skill-based card games played for money.

Recent legislation in various states has been kind to both online rummy and poker, in recognizing the skill-based element, suggesting, perhaps, a growing tolerance among lawmakers.

It may be a little premature to talk of a poker boom in India; it’s a developing market with a huge population and therefore huge potential.

But hey, the WPT already helped to kick start one poker boom. Who knows, maybe they can do it again.