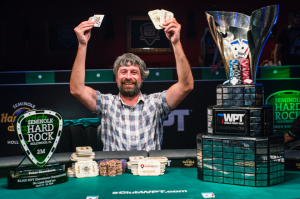 The WPT Seminole Hard Rock Poker Showdown in Hollywood, Florida has concluded. Justin Young, a Nevada native, is your champion. And he’s a big winner.

By winning this event, he also earns a spot into the WPT Tournament of Champions on Friday at the same casino he just won at, Seminole Hard Rock Hotel and Casino in Hollywood, Florida.

This was Young’s first WPT title, although he’s been close many other times. He had three previous top eight finishes in WPT events, but couldn’t quite get over the hump, until now.

Garrett Greer, his heads-up opponent, has a similar resume. Greer previously had four top eight finishes. Now he has a fifth. As a way of consoling him for his defeat, he will go home with a pretty nice $458,722 payment. Not too shabby.

The final table was stacked with talented players and another star, Cate Hall, came close to making it. She finished in 6th place and the official WPT final tables only hold six players.

This Was No Fluke

In some big poker tournaments, the champion is considered a fluke for being a one-hit wonder. Young certainly isn’t a fluke. The man had over $3.6 million in lifetime live tournament winnings prior to his WPT title. He’s now surpassed the $4 million mark.

This past December, the champ finished 3rd in the WPT Five Diamond World Poker Classic at the Bellagio in Las Vegas. In March 2015, he cashed in another WPT event in San Jose, California.

Last summer, he cashed in four World Series of Poker events. Granted, none of those won him the big bucks, but a cash is impressive nonetheless.

His largest career win was way back in 2008 at the WPT Doyle Brunson Five Diamond World Poker Classic. He finished runner-up to David “Chino” Rheem, one of the top players in the game. Young earned $936,760.

TOC the Only Thing Left

WPT Season XIV has but one tournament left on the schedule. That is the Tournament of Champions. Only WPT Champions Club members are eligible to play. Young receives an entry, which was automatically taken out of his recent win. Other season XIV winners were automatically entered.

The other competitors eligible are past WPT champions. That’s an extensive list of players which include the likes of Gus Hansen, Michael Mizrachi, Chino Rheem, Tony Dunst, Antonio Esfandiari, Erik Seidel, Ted Forrest, and many other legends of the game. The buy-in for the TOC is $15,400.