WPT Maryland Live!, a $3,500 buy-in tournament being played outside of the Baltimore/Annapolis area, is down to the TV final table, with six players in the hunt for the $350,000 first-place prize and admission to the World Poker Tour Champion’s Club. 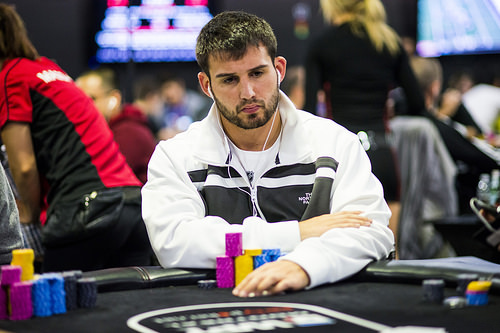 Darren Elias is hoping to win his third World Poker Tour event at WPT Maryland Live! on Friday, as the final table plays down to a champion. (Image:  worldpokertour.com)

Belz had exactly zero career WPT cashes prior to this event. Elias, on the other hand, has now crossed the $2 million mark in World Poker Tour events lifetime. He will be competing in his seventh tour final table.

Known to be outspoken (not a particular claim to fame among top poker pros, obviously), Hall has gotten the  “social justice warrior” hashtag for her views, along with Vanessa Selbst. As usually happens, the pros take sides, and among her champions on Twitter have been Scott Seiver and Liv Boeree.

Unless Elias wins the tournament, the WPT Champion’s Club will have a new member. Elias has a pair of WPT titles, his last being in November 2014 at the Playground Fall Poker Classic in Montreal. Two months prior to that, he won the WPT Borgata Open in Atlantic City.

Mario Silvestri kicks off Wednesday’s play in 3rd place with 2,700,000. He’s making his first appearance at a WPT final table, but does have over $70,000 career cashes on the tour, this being his third one.

Benjamin Zamani has the fourth-largest chip stack (2,075,000). This Florida native has been running hot this year, with a pair of runner-up finishes in WPT events this season. Zamani is currently ranked #35 in the world on the Global Poker Index list. He’s come close to entering the WPT Champion’s Club twice this year. Will third time be a charm at last today?

Finally, there’s Zachary Smiley. He is in the money for the first time in a major poker tournament, as evidenced by his lack of a Hendon Mob profile, which will surely change hereafter.

In total, the final table contestants have 42 career cashes in World Poker Tour events. Play will resume today at 3 pm EST at Maryland Live! casino in Hanover, Maryland. The tournament began with 554 runners.

Once the WPT Maryland Live! event concludes Friday, the tour will shift its focus to Paradise Casino in South Korea from October 5-11. After that, the WPT National Brussels runs October 13-16. Maybe not the least politically charged arenas these days, but there you go.

The tour returns to the United States October 14 for the WPT bestbet Bounty Scramble in Jacksonville on October 14. The Main Event buy-in is $5,000 and has a $1 million guaranteed prize pool.