The final major poker tournament of the year, the $10,400 buy-in WPT Five Diamond World Poker Classic is underway at Bellagio. After Day One, 550 players out of 605 total entrants remain, with registration still open and a long alternate list developing. 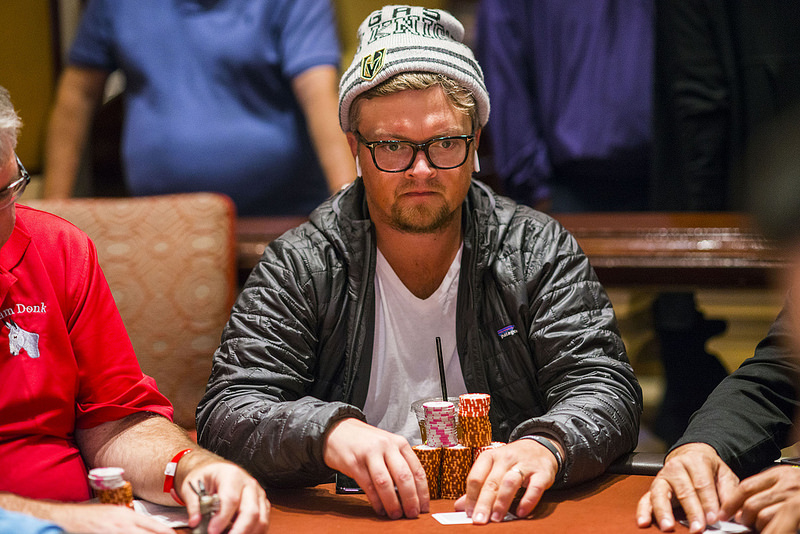 Brandon Meyers may have had the Vegas Golden Knights on his mind, but he still showed up for the WPT Five Diamond main event at Bellagio and raced out to an early chip lead with lots of poker still to play. (Image: WPT)

Cards will be in the air for Day Two at noon PT on Wednesday, with blinds starting at 200/400 with a 50-chip ante. Registration remains open until the start of level nine, or approximately 5:15 pm.

Daniel Negreanu, a Vegas Golden Knights season ticket holder, didn’t buy-in on Day One. He decided instead to watch his hometown hockey team win a thrilling overtime contest against the Anaheim Ducks at T-Mobile Arena, less than a mile from Bellagio.

But Kid Poker won’t be able to jump right into the game when play resumes on Wednesday due to an already lengthy alternate list. It appears he may have to “skip the event entirely,” he said on Twitter. Sitting around waiting to get into the action, he says, would cause him to be “tilted” from the start.

The WPT Five Diamond World Poker Classic is one of the most prestigious events on the World Poker Tour schedule each year, and one of the few international tourneys that seems to bring out the heavy hitters. It just wouldn’t be the same without poker’s most popular and successful tournament player.

Phil Hellmuth, the host of the WPT’s Raw Deal segment on Fox Sports and a legendary late arrival, also skipped Day One but is expected to join the party on Wednesday.

Some of the game’s biggest stars, including Dan Smith and Antonio Esfandiari, have won this legendary event. Last year’s winner, James Romero, received just a shade under $2 million when he outlasted 791 players.

Romero successfully made it through Day One in his title defense, but barely exceeded his 30,000-chip starting stack. He will begin Day Two with 35,500.

Of all the familiar faces seated at the Bellagio poker tables on Day One, some stars came and went, including Esfandiari, who was attempting to become the first player to cash five times in the WPT Five Diamond. That goal will have to wait another year, as the Magician was sent packing late in the day when he jammed his stack into Roy Young’s nut straight.

It’s hard to get your opponent to fold the nuts, apparently.

Tony Dunst, the WPT’s new lead TV commentator after replacing the legendary Mike Sexton, had a bit more luck than Esfandiari, making it to Day Two. But he barely exceeded his starting stack (34,000).

Art Papazyan, the WPT Season XVI Player of the Year leader, also made it to Day Two, but has one of the smallest stacks (14,750).