Brandon Meyers has been the star among stars thus far at the World Poker Tour Five Diamond World Poker Classic at Bellagio in Las Vegas, finishing both Day One and Day Two with the chip lead. 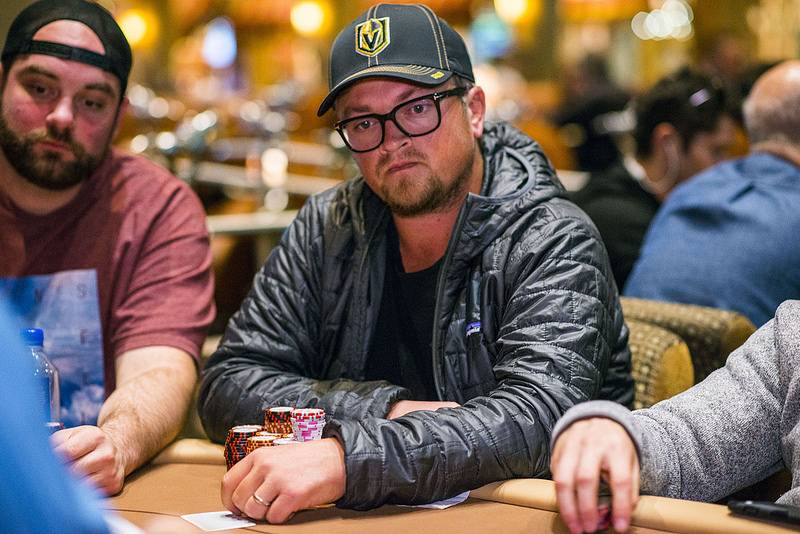 Vegas Golden Knights fan Brandon Meyers is getting a little more serious after bagging chips in the lead for the second straight day of the WPT Five Diamond World Poker Classic at Bellagio in Las Vegas. (Image: WPT)

As impressive as his performance has been through two days of play, having the chip lead entering Day Three guarantees exactly nothing. Out of 812 entries in this $10,400 no-limit hold’em event, there are still 320 remaining players, and only the top 81 will go home with prize money in their pockets.

When tournament action resumes on Thursday (cards in the air at noon PT) blinds will be at 600/1200/200, with players trying to position themselves for a run at an in-the-money finish, where the top prize pays nearly $2 million.

Elias and the Superstars

Three of the top five chip stacks own World Poker Tour trophies, including Darren Elias (214,700), who always seems to be in contention in WPT events. He has three titles on tour, nine final table appearances, and more than $2.5 million in winnings.

Earlier this year, Elias appeared to be moments away from becoming the first four-time WPT winner. At the Bestbet Jacksonville event, he had a sizable chip lead with three players remaining, but couldn’t close the deal.

After two days at Bellagio, “Mr. WPT” (we just gave him that name) is in a comfortable position to make a deep run. But there are still four days of poker remaining before a champion is crowned.

Rainer Kempe is also sitting in a good spot heading into to Day Three. One of the many young German poker superstars, the 2016 Super High Roller Bowl champion has 200,000 chips.

And, of course, what major poker tournament would be complete without the Poker Brat and his good buddy DNegs? Both players registered late on Day Two and advanced to Day Three with plenty of chips. Phil Hellmuth walked away with 109,400, and Daniel Negreanu bagged 76,400, almost exactly an average stack.

* past WPT Main Tour winner
+ past WPT Player of the Year

The WPT Five Diamond is the last major live poker event of 2017. With a total prize pool of $7,876,000, the top two finishers will see seven-figure paydays.

Will this year’s final table be filled with known names or no-names? Stay tuned to see who advances.

There is no live stream available until the final table, which begins Sunday at 4 pm PT, when the subscription-based PokerGO begins broadcasting the action.

Men there are some really good players Gus Hansen, Phil Hellmuth, Daniel Negreanu.
Hope i could be some day rigth in that place. Being 2nd wouldn´t be the worst thing LOL. But to win 1st just a dream not just for the money (i wouldn get angry), but to be recognized (as did Chris M) being a online player. I have a lot to learn and practice. Trying so far

Anyone who thinks this game is NOT a skill game than how can they explain how these players get to top every tournament. I agree that patience must be the go to strat in these and admire those that can find the exact time to fold em or holdem.
To those with PokerGo this should be a fine matchup with any of these players making final table sunday at 4pm.
I too christhian dream of playing in one of these too. I think it’s why we are always excited to hear of an online player running good. Cheers nonames!