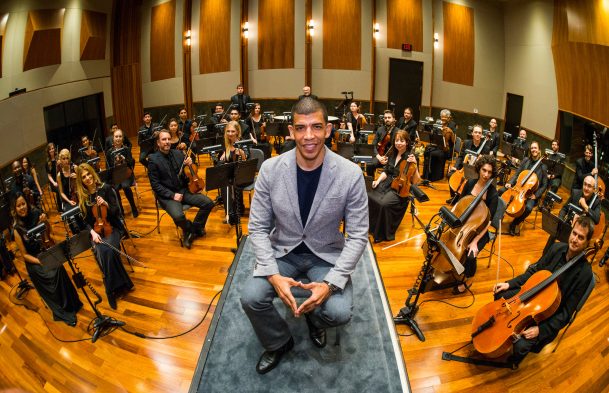 A man of many talents, WPT CEO Adam Pliska co-wrote part of the original score for the next season of the World Poker Tour, which features the orchestral theme song “Rise Above.” (Image: WPT)

“Rise Above” is the third installment of the WPT Legacy Through Art Series, which launched in 2016 with the goal of capturing the emotions, passions, and personalities that help tell the story of poker. It also seeks to “capture a deeper aspect of poker history through the arts.”

(You can see a teaser video of the music and its production process at the bottom of this article.)

The two chapters that preceded it were painter-sculptor Steph McArthur’s piece “Light in the Darkness,” featuring Mike Sexton and Vince Van Patten, and the custom card-design exhibit and deck of playing cards by Jorge Torrealba.

“One of the most important elements to the WPT’s success is that since the beginning we have controlled all aspects of our television show to assure the highest production values for our millions of viewers throughout the world,” Pliska said in the announcement.

“Few people know that we compose all of our own music on the World Poker Tour. In fact, we have created an extensive music library, both to use on our show and in other reality- and sports-based programming to help complement the great stories that play out on screen.”

“Rise Above” was produced and edited by WPT Studios in conjunction with Big Block Entertainment. The music was composed by Sharal Churchill and tries to capture the emotional journey of a player on their way to adding their name to the Champions Cup.

A new title sequence is just the latest change announced by the tour. Earlier this month, WPT Distribution partnered with GameTV to bring episodes to more than nine million homes throughout Canada.

A couple weeks before that, Mike Sexton announced that he was stepping away from the broadcast booth after 15 seasons. Tony Dunst, host of the popular Raw Deal segment, was promoted to take over the legendary poker announcer’s role.

The tour has also been making moves around the globe. Back in May, they expanded their partnership with Adda52.com, India’s largest online poker website, by announcing both the first-ever WPTDeepStacks India and a WPT India Player of the Year award.

The WPT also joined forces with PokerStars for cross-promotion of the “MonteDam Swing.”

However not all recent developments globally have been positive. Back in March, the WPT was forced to cancel a stop at South Korea’s Paradise Casino at Jeju Grand due to rising political tensions between China, US, and the host country.

Here’s a look at the new Rise Above open, which you can also see on new WPT episodes every Sunday night at 11 pm PT on FSN.

Inspirational. Makes me wanna Rise Above and finally get my self to a WPT Event .