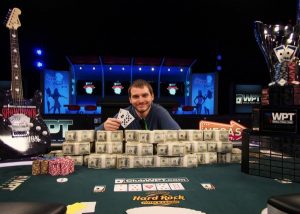 639 poker players ponied up $10,400 to compete in the 2015 WPT Bellagio Five Diamond tournament. The last man standing was Kevin Eyster.

For the man nicknamed “1sickdisease” online, this was his second career World Poker Tour title.

In 2013, he won the WPT Seminole Hard Rock Showdown Championship Event, earning $660,395 for his efforts.

This title, held at the world famous Bellagio in Las Vegas, was worth even more money. Much more money. $1,587,382, to be exact, before taxes.

Eyster also has a World Series of Poker bracelet and circuit ring.

In 2013, he won his bracelet in a $5,000 six-handed no-limit hold’em event, and won a circuit event that same year at Chocktaw Casino in Durant, Oklahoma.

The flop came out A-9-4. Jennings checked. Eyster threw out a 600,000 continuation bet with top pair. Jennings made the call.

The turn paired the 4, and Jennings checked to the chip leader. Eyster fired another bullet, this time 975,000. Jennings then shoved all in for 5.3 million and was called by Eyster’s dominating hand. Needing a 9 to stay alive, Jennings was sent packing when a 5 flipped over on the river.

Speaking of Fedor Holz, the young German poker star claimed yet another impressive victory. This one in the WPT Alpha8, the last super high roller event of the year.

2015 was a successful year for Fedor Holz. At the WSOP in Las Vegas this summer, he finished 25th in the Main Event, 3rd in a $10,000 six-handed no-limit hold’em event, and cashed in two other events.

In the month leading up to the WSOP, Holz had two cashes at the EPT exceeding $300,000.

Fedor Holz and Kevin Eyster will enter 2016 as two of the top poker players in the world. They’ve both won at the highest levels and likely will continue to do so going forward.