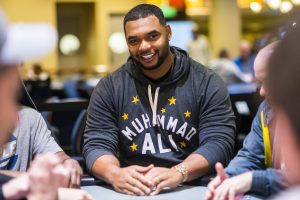 Ryan Hughes was the Day Two and Day Three chip leader at the WPT Bellagio Five Diamond World Poker Classic. But he didn’t make it back for Day Five.

After entering Day Four with a massive chip lead, he busted in 21st place ($45,269) after Justin Bonomo cracked his aces when he called an all-in bet on the flop with an open-ended straight draw, and hit.

Bonomo is trying to close out an impressive 2016 with another big score. He’s already guaranteed at least $45,269, with the potential to win as much as $1.9 million in this event.

Bonomo finished in the top three at the WSOP three times, including a 2nd place finish in the $50,000 Poker Players Championship ($801,048).

Another player who had a strong 2016 WSOP, Chris Klodnicki, made it through Day Four. But he had the smallest stack (458,000). Klodnicki is hoping to win his first WPT title.

Former NFL Star on the Prowl

Richard Seymour is most known for chasing quarterbacks, but the former NFL star defensive lineman has been busy chasing the chip leaders this week.

Seymour finished off Day Four with 553,000, a small stack. But you can’t ever count out a determined athlete. He used to rush the passer with fierce intensity for the New England Patriots and Oakland Raiders.

Seymour is no slouch at the poker table. He made a deep run in a WSOP event this past summer and plays the game regularly.

Friday’s action began at noon PST at Bellagio in Las Vegas. Day Four began with 75 players and concluded with 19. The bubble burst early on Thursday after the 73rd place finisher was eliminated.

This $10,400 buy-in tournament is set to play down to the final six players on Friday. On Saturday, the final table will take place. It will be recorded by Fox Sports, hosted by recent WPT champion Mike Sexton and Vince Van Patten.

You will be able to watch the edited version of the final table on Fox Sports sometime in 2017.