Day One at the 2017 WPT Bay 101 Shooting Star in San Jose concluded Tuesday evening with Stephen Graner in the chip lead. 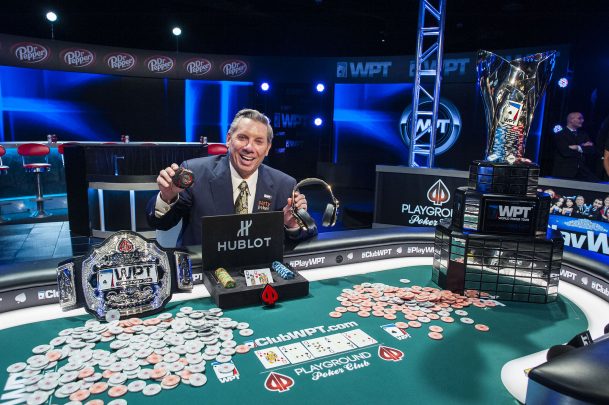 Mike Sexton made it through Day One at the 2017 WPT Bay 101 Shooting Star. The poker announcer remains in contention for Player of the Year. (Image: wpt.com)

Graner has more than $80,000 in career winnings on the World Poker Tour. But he’s never made a final table appearance. He did, however, win $1.2 million for his 2014 EPT Prague Main Event title.

Day 1B saw many top pros come and go. Mike Sexton didn’t finish the day with a big stack (43,100), but he advanced and survived. The WPT commentator, fresh off a 4th place finish at the L.A. Poker Classic, is making a late push to win Player of the Year.

Benjamin Zamani had a seemingly insurmountable lead in the POY race, but Sexton still has a chance. There are only three events left before the season concludes.

The Poker Hall of Fame member isn’t the only poker announcer left in the field. Lon McEachern, ESPN’s long-time WSOP broadcaster, made it through Day 1B with 105,000. David Tuchman, the live streaming commentator during World Series of Poker events, has 111,800.

The remaining field almost appears to be an All-Star contest. Nearly everyone who advanced through the Day 1B flight is a household name.

Chino Rheem has a big stack (174,700). That will come as a surprise to exactly no one. He seems to be lurking near the top of the leaderboard every few WPT events.

Scotty Nguyen is still grinding the tournament circuit. He will have a healthy stack on Day Two (140,500). The WPT Champions Club member continues to be a crowd favorite.

Todd Brunson didn’t have much luck on Day 1A. He fired another bullet on Tuesday and doesn’t regret it. The 2016 Poker Hall of Fame inductee finished with 112,200.

This tournament will conclude on Friday with a champion being names at the final table. After Wednesday’s action, there will be 36 players remaining in the tournament field, and still alive to fight for the title.