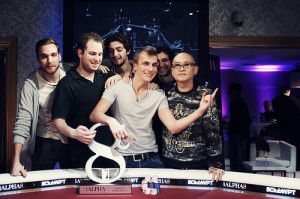 Just as the World Poker Tour wrapped its very successful inaugural WPT500 tournament at the Aria in Las Vegas, it put forth an announcement about its Alpha8 series for the super high roller crowd.

Executives called the first season of WPT Alpha8 a success. With buy-ins of $100,000 (and even £100,000 in London) for each of the four stops, some of the wealthiest poker players and businessmen in the world took to the tables to play for even larger sums of money. Television shows comprised of the tournaments and accompanying activities have been garnering good enough ratings on the FOX Sports 1 network that Season 2 has been ordered.

And the first two stops for that season have been announced.

The first stop of Season 2 of WPT Alpha8 will offer players a seat at the Palm Beach Casino in Mayfair. The return to London will take place on October 6 and 7, 2014, though players will have a lower buy-in than last year. The new £60K is more in line with the $100K buy-ins at other stops, considering the exchange rate, and may entice more players to attend.

The 2013 event took place later in October, but required a £100K buy-in, which was quite a bit more than the other stops in Season 1 when converted. The tournament drew 20 entries, consisting of 12 players and several reentries from them. When it was all said and done, Philipp Gruissem won the tournament for £862,400 ($1,385,273).

For the first time, Alpha8 will bring its super high roller action to Las Vegas. The Bellagio will host the second stop of the new season from December 18 to 20. The $100K buy-in tournament will allow for reentries.

The Las Vegas stop on the tour will offer the Alpha8 option in conjunction with its regular December fare, the Five Diamond World Poker Classic. As one of the few tournaments still with the WPT since its first season, the Five Diamond Main Event is also one of the few WPT events that still boasts of a $10K buy-in. the WPT Five Diamond is set to run from December 15 to 20, so players who bust from that tournament can register for the super high roller Alpha8 option.

WPT President Adam Pliska commented on both Season 2 events: “Not only are we returning to one of the most prestigious locations in the world at the Palm Beach Casino in Mayfair, but we are also bringing WPT Alpha8 to the home of high-stakes poker at Bellagio in Las Vegas, where we are already expecting to draw one of the largest fields in WPT Alpha8 history.”

No word has been released on whether Alpha8 will retain host and producer Lynn Gilmartin and commentators Ali Nejad and Olivier Busquet.

The WPT did reveal, however, that Season 2 of Alpha8 will remain on Fox Sports 1 in its Monday night time slot. Though it began on Sunday nights, the recent switch to Mondays at 9pm EST has been a successful one. This day and time will continue for the second season.