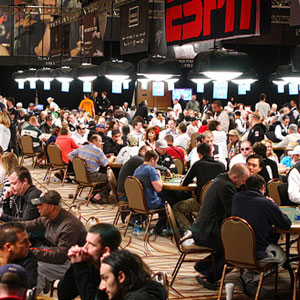 Dates for the 45th running of the World Series of Poker in 2014 have been announced with the 49-day schedule culminating in an exciting Main Event.

Sure, less than two months have passed since Ryan Riess was crowned the 2013 World Series of Poker Main Event World Champion, but that doesn’t mean it’s too early to start looking at what 2014 has in store for poker’s most prestigious event. Eager fans will be glad to know that the dates for the 2014 World Series of Poker (WSOP) have been announced.

The 45th running of the WSOP will begin on Tuesday, May 27, 2014 at the Rio All-Suite Hotel & Casino in Las Vegas. Those who have closely followed the longest-running and lucrative tournament series will note that 2014 marks the tenth straight year that the event will be held at the Rio Convention Center; Binion’s Horseshoe previously hosted the final days of the 2005 Main Event.

The 2014 WSOP will run for 49 consecutive days and feature the series’ packed schedule of gold bracelet events, cash games, satellites and daily deep stack tournaments. However, the highlight of the summer poker festival will be the Main Event. The $10,000 buy-in No-Limit Hold’em WSOP Main Event championship will span ten straight days from July 5 through July 14, 2014. Saturday through Monday, the first three days of the event, will feature Day 1 starting flights. And on July 14 the final “November Nine” players for the Main Event will be determined.

Players who want to vie for their chance at a seat in a WSOP event (including the Main Event) can go to WSOP.com’s real-money online poker offerings. Potential competitors in New Jersey and Nevada will get the exclusive chance to win those seats. The opportunity extends to both residents and visitors of either state. Buy-ins for the various tournaments start as low as $75. On May 27, cash games will begin and run 24 hours a day for the seven week series.

Return of The Drop

After a year on hiatus, Big One for ONE DROP will return for its second time on Sunday, June 29. The event was created in 2011 by Guy Laliberte, founder of Cirque du Soleil. ONE DROP is an organization meant to make clean drinking water accessible to impoverished countries across the world. The Big One for ONE DROP gives major high rollers a unique tournament of their own because the buy-in for the No-Limit Hold’em event is $1 million. With a cap of 56 players, the victor could net over $20 million. Instead of WSOP taking their usual rake from tournaments, $111,111 of every buy-in will go to the charity.

Thursday, July 3 and Friday, July 4 will see the return of Little One for ONE DROP as well. A significantly cheaper version of its big brother, Little One has a $1,111 buy-in for it No-Limit Hold’em event. Through the first four levels of the event, players will have unlimited re-entry. For its debut, Little One brought in 4,756 players and a $4.3 million prize pool where the winner received $663,727. Little One for ONE DROP will be the last No-Limit Hold’em event before the WSOP Main Event.

The announced events are just a taste of what’s to come for 2014 WSOP. With close to 500 poker tables across 100,000 square-feet of space at the Rio Convention Center, fans should expect a full event-by-event schedule sometime in January. Though events are still being finalized, more than 60 gold bracelet events can be expected, along with No-Limit Hold’em tournaments and other poker variations. Events tailored for seniors, ladies and casino employees are also planned.

The 2013 WSOP brought in the series’ largest attendance with 79,471 participants. A hefty prize pool of over $197 million was generated by 62 events. The Main Event saw Ryan Riess best 6,352 players and walk away $8,361,570 richer. If the 45th installment of the poker extravaganza is just as record-breaking as last year, plenty of people are going to be big winners.

Would love to make it out there this year… hopefully.

Could I please be notified when the WSOP 2014 Main Event schedule will be published or get it sent to me? I am working in Afghanistan and want to put my vacation in for the tournaments I want to play? I would appreciate if you can assist me with this, thanks