The World Series of Poker Main Event is always full of surprises. Based on the numbers from the first two Main Event flights, it seemed clear that the numbers for the tournament would be down significantly this year, perhaps even falling below the 6,000 mark. But Day 1C changed all that, as a massive wave of players filled the Rio, breaking a record that was set just last year.

For the second year in a row, the WSOP Main Event has broken its record for the largest single day starting flight in the event’s history. An impressive 3,963 players were seated on Tuesday, beating out the 3,768 who turned out on the final starting day last year. 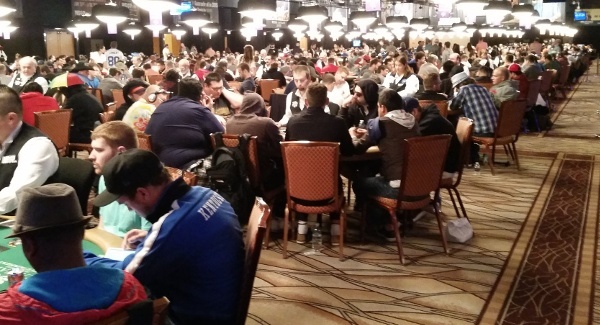 Nearly 4,000 players packed the Rio Convention Center on a record-setting day for the WSOP Main Event on Tuesday. (Image: CardsChat.com)

All of those players coming in on the final day have made a huge difference in the final size of the Main Event field. The final tally is 6,420 players, only slightly down from the 6,883 who turned out last year.

Considering the number of events in the WSOP this year that could have served as a recreational player’s Main Event, such as the Colossus, being down just a few hundred players could reasonably be seen as a big accomplishment for the World Series, and it is likely that organizers will be very happy with that number.

Knowing the field size means we also know the ultimate prize pool now. The 4,389 players remaining in contention are fighting for a war chest of over $60.3 million, with $7,680,021 going to this year’s Main Event champion.

As promised, this year will see the top 1,000 players cash in the tournament, with a minimum cash (which will go to anyone finishing 649th through 1,000th) being worth exactly $15,000. Also, each of the top nine players will walk away with at least $1 million.

At the end of Day 1C, it was Florida’s John Gorsuch who bagged the most chips. Gorsuch, who has cashed three times at this year’s WSOP and finished 147th in last year’s Main Event, has grabbed the overall Day 1 chip lead with 198,100 chips.

Day 1C may be the day for recreational players to come in and start their Main Event journey, but it is also popular among pros too, and plenty of poker’s biggest names came out of the day with plenty of chips heading into Day 2. Phil Hellmuth, Daniel Negreanu, Michael Mizrachi, Joe Hachem, and Jamie Gold all ran their starting stacks up significantly during the day, while Phil Ivey will be coming back with a relatively small stack.

Celebrities were out in force on Tuesday as well, and a few even managed to bag a good number of chips at the end of the day. Former Tampa Bay Devil Rays first-round draft pick Wade Townsend is in the Day 1C top ten, having bagged 146,000, while comedians Brad Garrett and Ray Romano both picked up a few extra chips before ending play last night.

Player of the Year Update

With only the Main Event left to be settled here in Las Vegas, Mike Gorodinsky holds the lead in the 2015 GPI WSOP Player of the Year race. Gorodinsky, who won the Poker Players Championship, has 2157.19 points, about 215 ahead of Anthony Zinno. Paul Volpe and Shaun Deeb are in third and fourth places respectively, after which there is a significant gap between them and Brian Hastings, who is in fifth.

A deep run in the Main Event by any of the leaders could still shake things up, however. And remember, the WSOP Europe will also count towards the Player of the Year standings, so we’ll have to keep an eye on Germany this October to find out who will ultimately come out on top.

Wednesday is Day 2AB for the Main Event, with the players from each of the first two starting flights coming back to complete five more levels of play today. Those two flights will be taking place simultaneously, but they aren’t combined: the two groups will play in separate areas and will not be mixed. Only on Friday will the three flights be combined into one group for Day 3 of the Main Event.

Numbers are down ~4% yr over yr in the main.

For the headline to be that there was a “record breaking” day in signups is a joke….

It’s very clear tournament poker in the US is in a slow decline while cash game poker is in a quicker one. People in the industry can spin it all they like; adding a bunch of small buyin tournaments to the WSOP, which I am in favor of FTR, and then pretending like the predictabloy large turnouts for them mean poker is growing again, is disingenuous at best.

The real story is the dip in the regular 1000/1500 level tournaments. Maybe people are finally catching onto the fact that there are much better options than playing a 1500 with the structure of a 350 in most venues…..who knows.

I would like to watch a live stream. Is there anything out there or is it a TV exclusive? I’m in Belgium so I can’t watch ESPN.