The World Poker Tour (WPT) is partaking in some March Madness fun. But instead of hosting a college basketball office pool, the WPT has a 64-player poker bracket for fans to vote on. 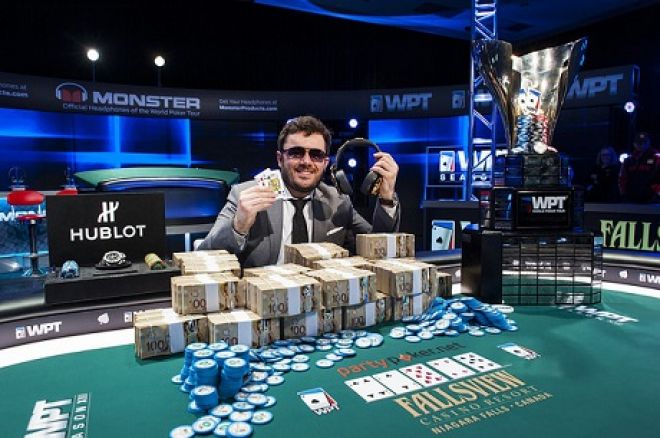 Anthony Zinno is already one of the most successful players in World Poker Tour history, and now he is also part of a “March Madness” 64-player poker bracket that fans can vote on.  (Image:  WPT/ca.pokernews.com)

Coinciding with the start of the 2016 NCAA Tournament, college basketball’s biggest event, the WPT is asking poker fans to vote for the best WPT champion of all time.

To do so, over at WPT’s official website, fans of the popular television poker series must make some difficult choices as to which poker players are most deserving of advancing to the next round.

The first round of voting has already concluded, but the second round of voting is open until March 21. There are 32 players left in the field, with 16 selections to be made. Players were seeded in a similar format to the NCAA Tournament. The voting began with 64 players seeded based on overall career performance in WPT events.

There are four brackets (Spades, Diamonds, Hearts, and Clubs). Each bracket has 16 players seeded 1-16 based on WPT performance. The winner in each heads-up match every round is determined by the number of votes.

The Spades bracket had some interesting choices in the first round. Gus Hansen, a three-time WPT champion, is the bracket’s top seed, and advanced by receiving more votes than Scott Clements.

Hansen, known as the all-time biggest loser in online poker, hasn’t had much success on the felt in recent years, nor has he received much camera time lately. Still, the Great Dane is moving on and currently facing David Williams in Round Two.

Williams, like Hansen, was a popular figure during the poker boom era. Another former poker boom era player, Howard Lederer, didn’t receive enough votes to defeat Tony Dunst. That shouldn’t come as a surprise, considering Lederer is one of the most hated men in poker history.

Until March 21, voting is open for the Second Round. Round Three will begin immediately after that and run until March 25. March 29, April 1, and April 8 are the final days to vote on the following rounds. A winner will be announced April 11.

Round Two has some intriguing match-ups. Poker fans will have to make some difficult decisions.

Those are just some of the 16 heads-up voting contests poker fans must choose between. Go get your vote on. You won’t even have to listen to any debates.