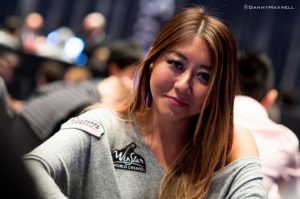 The Women in Poker Hall of Fame is taking nominations for its 2016 class. (Image: PokerNews)

When it comes to the Women in Poker Hall of Fame (HOF), a few talented ladies would love to join the likes of Jennifer Harman, Cyndy Violette, and Kathy Liebert in this year’s class. With nominations now under way, it will be interesting to see who makes the cut.

In 2008, the Women’s HOF inducted its first class, honoring four of the top female poker players of all time.

Barbara Enright, Linda Johnson, Marsha Waggoner, and Susie Isaacs all deservedly made the cut for their impressive contributions to the game.

Jennifer Harman, a 2015 Poker HOF inductee, received the same recognition from the women-only version back in 2010.

One of the greatest players of all time, male or female, Harman was joined by Kathy Liebert that year, along with  one of the early innovators of Las Vegas poker tournaments and promotions, Billie Brown.

Liebert and Harman were two of the most recognizable faces at the height of the poker boom era. Playing in many high stakes televised poker events, these ladies proved to a global TV audience that women can compete with the best male poker players and hold their own.

Poker fans may nominate women they believe deserve a 2016 induction on the WIPHOF website. There are three major pre-requisites voters must take into consideration when considering who to nominate:

-Must have at least 10 years of poker industry/playing experience.

-Must have made an impact on the poker world, whether it be winning World Series of Poker bracelets, dominating high stakes cash games, or helping grow the game.

After the nomination process concludes, final approval of each inductee must go through a Board of Directors. The requirements differ from the Poker Hall of Fame in a couple of ways. First off, Poker Hall of Fame nominees must be at least 40 years old.

The Women in Poker HOF doesn’t require its nominees to have played at the high stakes level, but having success at the highest limits certainly won’t hurt anyone’s chances. No set time and location for the 2016 ceremony has been set, but it will take place on July 5th.

According to recent surveys, only 24 percent of poker players are female. The game is dominated, in terms of popularity, by men, which is troublesome for poker’s long-term health.

There are many  ladies who are incredibly talented players competing at the highest levels right now.

That includes Vanessa Selbst, Maria Ho, and an up-and-coming talent, Kelly Minkin. But the game of poker would greatly benefit from an increase in female participation.

Organizations such as the Women in Poker Hall of Fame, along with many of the top women poker players, work extremely hard to push for gender equality in poker. However, the game remains far more popular among males than females.

Now who saids that only male can play well in Poker? I wish I can be just like them in the future.

What? Women need their own hall of fame because they are inferior to men? Why not just have a PHOF that includes both sexes? Is it still 1950?