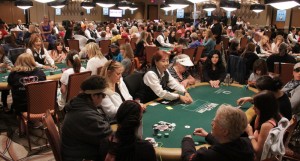 The World Series of Poker has come a long way in its decades of history. The Series has grown immensely and learned over time how to welcome more people of all bankrolls and levels of poker interest to the tournaments.

The WSOP 2014 has also matured in its treatment of women. From a time when women were given the ladies-only tournament so the “poker wives” would have something to do while their husbands played serious poker to a time when women are viewed as equal players, growth has been key to welcoming more women to the game.

At times, it has taken a loud and collective voice to prompt change, but the executives associated with the WSOP have become much more attentive through the years. Most have a true desire to do anything possible to encourage all players to compete, have a good time, and become part of poker history.

Over the past decade, the Ladies Championship tournament at the WSOP has been the source of much debate and some change.

The arguments regarding whether the women should have a separate tournament that awards a gold bracelet are varied. Some say there is no need for a women-only tournament, as they are perfectly capable and welcome to play any open event, while others tout the friendly environment that makes women feel more comfortable than in an open tournament.

Others argue that it is discriminatory to exclude a gender – men – from the event. Yet some say the Ladies Championship encourages more women to play, gives them confidence, and translates into a more diverse game for everyone in the long run.

In some years, the debate raged to a fever pitch and brought men into the game. Citing anti-discrimination laws in Nevada, men sometimes entered the low $1K buy-in event for various reasons, either to protest the women-only event or to get good value in a “soft field” for their cheap buy-in in relation to other larger buy-ins at the WSOP. For whatever the reason, the presence of men in the tournaments year after year created a negative feeling among a lot of the women and quite a few complaints to the WSOP staff.

Last year, the WSOP executives tried something new. They offered a $10K buy-in Ladies Championship tournament, one that offered a special 90 percent discount to women. Men were perfectly welcome to play, but had to pay full price. Women were generally thrilled, and the plan worked. No men entered the 2013 WSOP Ladies Championship. And it worked like a charm again in 2014.

So, why was attendance down so drastically in the 2014 Ladies Championship? Let’s first take a look at the past 10 years of registration numbers:

The jump in 2006 was obviously related to the poker boom, and the numbers continued to stay high in all WSOP tournaments, including the ladies-only event. Play dropped considerably in 2011, at the same time that the event was moved to a date later in the Series. Participation increased again in 2012 and then 2013, but it fell to its lowest point in nine years in 2014.

The reason for this year’s drop was fairly obvious to most players. There was a $1,500 NLHE Monster Stack tournament scheduled to start the day before the Ladies Championship. The deep stacks and rumors of a massive field enticed many players to take their $1K buy-ins, add another $500, and play the Monster Stack. For most players, it was a better deal for their money and a logical choice, while others remained committed to the Ladies Championship.

Some expressed to the WSOP staff that the scheduling of the Monster Stack tournament the day before the Ladies Championship was hurtful to their favorite event of the year, but the WSOP had previously not anticipated the kind of turnout and popularity of the Monster Stack. It seemed like an unintentional scheduling conflict, but many women have asked that it be considered next year.

There was one primary dust-up at this year’s WSOP that drew a lot of attention from men and women alike. Coincidentally, it revolved around the final table of the Monster Stack tournament.

Sean Drake was one of the players at the final table and playing for the $1.3 million first place prize. A group of his supporters decided to make custom t-shirts for the occasion, using an old slogan that Sean and friends had once used to boast of Sean’s dominance in tournaments. “Play like Drake and rape” was the slogan, referencing raping chips from other players. The shirts showed “Play like Drake” on the front, with “and rape” on the back.

Professional poker player Rupert Elder was the first to take a photo and spread it on Twitter with some disgust at the use of the word “rape” on the shirts. More people, including this author, immediately began tweeting their horror at the slogan and calling on the WSOP to eject those fans, duct tape the word “rape,” or force them to change shirts. The offensive phrase was not only being seen by many players and fans at the WSOP, but on the tournament’s web live stream as well.

Some time later, the players did change their clothes. The WSOP never responded as to whether they played a role in that decision, while one of Sean’s sponsors did. The following day, Sean clarified that he has not used that phrase or the word “rape” in conjunction with poker in over one year, and he had no part in his friends’ decision to make the shirts. His ultimate response to the situation was that he and his sponsor would each donate $500 to a charity to benefit victims of rape.

While the WSOP may or may not have handled that situation, some felt that it was not their business to do so, while others asserted that the WSOP does have the discretion to censor clothing if deemed offensive. The word “rape” is offensive to a great number of people, with women having expressed the most outrage at the use of it on shirts in this particular instance.

In this author’s opinion, if women are to feel welcome at the WSOP and encouraged to attend in greater numbers, words like “rape” cannot be tolerated spoken at the tables or printed on clothing.

The WSOP has come a long way with regard to ensuring the openness of the Series to all players. A few extra steps when situations arise would keep that tradition alive.

There should be a rule about offensive clothing worn by players at WSOP.
I also think the Ladies Event needs to be reduced to a 500.00 buy in that way more Women could afford to play Event.
Men entering the Ladies Event it’s a disrespectful stupid move that’s driving Women players from Event.

Male or Female (we’re all players), ultimately it should be a players choice! Lets say one day the poker world will offer three different tournaments.. Men’s only, Women’s only and CO-ED… why not? For the love of the game (and the money involved) most will find themselves playing two out of three of these tournaments.. And yes “gender-sensitivity” should definitely be a part of the game when both sexes are sharing the felt.