Woman Goes into Labor at Aussie Millions, Husband Goes on to Cash 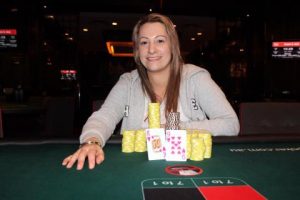 Aussie Millions Baby: Katrina Sheary goes into labor during Event 1 of the Aussie Millions, but her husband takes over and wins $6,495. (Image: pokernetwork.com)

The Aussie Millions always produces some unexpected results, but few could have predicted that one local woman player would have to abandon her stack after she went into labor.

Initially reported by the live updates team inside the Crown Casino in Melbourne, Australia before social media sage Kevin Mathers disseminated the information across the Twitterverse, the incident has since sparked a number of debates within the poker community.

According to reports, Sheary sat down to play the third flight of Event 1 at the Aussie Millions, but had to cut short her time at the table after her contractions started.

Although she was late into her pregnancy, Sheary’s due date wasn’t supposed to be for a few weeks. Apparently the baby was on its own time schedule, though.

As the action in the $1,150 Hold’em tournament started to heat up, Sheary was forced to call for assistance after she went into premature labor.

Acting quickly, the Crown’s tournament staff helped her to the front of the casino, where she was taken to the hospital as the final level of the day played out.

With a player forced out of the tournament through no fault of her own and a stack of 16 big blinds still on the table, the tournament organizers were forced to make an immediate decision on how best to proceed.

As flight four took place the following day, Sheary gave birth, which meant she wouldn’t be able to return to the felt on Day 2 to continue playing. Fortunately, her husband Pete, also a poker player and now a new dad, offered to take her place.

After talking to the tournament director, Pete was allowed to replace his wife at the table and continue playing as normal.

“She played Flight 3 (of 4), premature birth the next day, husband takes over day after that,” tweeted Mathers.

With the switch made, Pete went on to finish in 25th place and bank $6,495. But not all the players were happy with that outcome.

Concerned that substituting a player while a tournament was in progress could be unfair, a number of players, including Liv Boeree, aired their views online.

“With the Aussie Millions/woman in labor situation, surely fairest solution for all involved is to pay out the ICM value of her stack?” tweeted Boeree.

Although it’s certainly a unique situation, the people responsible for the event had actually put a framework in place to deal with unexpected tournament departures.

As pointed out by Mathers, Rule 2.13 of the Aussie Millions’ terms and conditions allows the tournament director to transfer a player’s stack to a substitute under exceptional circumstances.

“At the discretion of the Tournament Director, a Tournament entrant may transfer his/her entry to another person, provided that person is entitled to enter the Tournament in accordance with clause 2.2 and he/she has not already entered the tournament,” reads clause 2.13.

While it’s unlikely such an event will happen again anytime soon, it’s good to know that tournament organizers are equipped to deal with almost any issue if it comes up.

We think it would have been more exciting if the kid had actually been born on the felt, of course, with the inevitable complaints about event delays that would have ensued.

I think it is fine to allow her husband to continue. I get that people would rather see one player less but if they did do an ICM payout, what happens to her chips? I guess 16BB will be taken away from the table.. That is also not great.

Good they had a plan in place

wah to Liv boree (whom I love 🙂 )and all the other cry babies.
it was definitely an exceptional circumstance.
very good job by the director to have rules in place already,
I just wonder what they named the new poker player 🙂