Winning Poker: Why Conscious Bets Are Your Opponent’s Biggest Tell

I watch a lot of old movies. They’re a wonderful reflection on the times in which they were made, but they’re not reliably accurate as they tend to exaggerate and distort reality in the interests of drama and a good story.

Such is clearly the case with their depiction of poker. In the movies, poker is all about “tells” and keeping a good poker face. To win at poker in the movies, the superior player need only concentrate hard enough to spot the “giveaway” tell of his opponent, while stone-facedly not giving off any of his own. 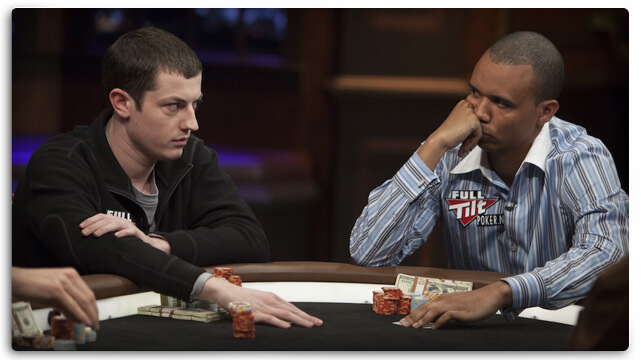 Tom Dwan, seen here on an episode of Poker After Dark, is trying to airdrop the strength of his hand to Phil Ivey. (Image: YouTube/Full Tilt Poker)

In reality, this is rarely the case. While players may exhibit certain unconscious behaviors that may help their opponents determine whether they are strong or weak, these tells are rarely consistent nor frequent enough to give the typical player in a typical game much of an edge. If anything, looking for these tells is often an unhelpful distraction from what should be the chief task at hand – playing thoughtful poker.

In a typical game, most players reveal the true strength of their hands in very simple and easy-to-spot ways. When they perceive themselves to be strong, they bet or they raise. When they think they are on a drawing hand, they tend to check and call. When they gauge themselves to be weak, they tend to fold to pressure. Most of the time, if we rely on these general patterns, we can correctly assess the true strength of our opponent’s hand.

There’s a useful expression that should be applied regularly to poker. If you’re in the American West and hear hoof beats, they’re probably horses, not zebras.

It may be zebras, of course — some crazy millionaire may have imported dozens of zebras just for this occasion — but, most of the time, the herd will be horses.

That said, there are four common situations where a bet or a raise often does not indicate true strength. Let’s list them:

Typically, among beginning, intermediate, and non-highly skilled players, significant bets and raises mean strength. Here are some examples of what I’m talking about.

In each of these examples, many players are tempted to stick with their “good” hands, even when the evidence is telling them not to. They’re hearing zebras instead of horses, and don’t want to muck a strong starting hand that became weaker after the flop. Even so, we must vigilantly resist the urge to read deception into situations that would otherwise require us to fold hands that we have long waited for.

In countless more examples that you could construe, your opponent is telling you he has a very strong hand. You don’t need to see any special tell. You know it because of his conscious behavior – his bet.

While it is tempting, in the interest of continuing with the hand, to assign deceptive intent to your opponent’s actions, it will often save you a ton of money to believe what you are seeing and to fold.

I really needed to read this, and the funny thing is I ended up here accidentally. I often make the mistake of believing that a player is bluffing when he isn’t and it is often when I have a premium hand that I’ve been waiting for. I have been working on this and believe I’m getting better about folding when I should. Still it was nice running into this article at this time as this is something I’m currently working on.
Over thinking it is probably my biggest problem.